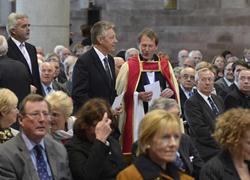 St Anne’s Cathedral hosted a Service of Choral Evensong on Sunday September 23 to mark the centenary of the signing of the Ulster Covenant.

(Download sermon by the Dean of Belfast, the Very Rev John Mann, here)

Clergy who took part in the service, led by the Dean of Belfast, the Very Rev John Mann, included the Moderator of the General Assembly of the Presbyterian Church in Ireland, the Rt Rev Dr Roy Patton, and the Rev Donald Ker, representing the President of the Methodist Church.

Music was provided by Murley Silver Band, the Adoro Choir and the Cathedral Choir.

A minute’s silence was observed at the start of the service in respect of the Spence family who lost three members in a farm tragedy the previous weekend, and of the two female police officers murdered in Manchester.

In his sermon, Dean Mann said the challenge was to commemorate this and other centenaries with the objective cast of history and the emotional charge of living the present.

He stated: “We have a chance to treat 2012 as a significant watershed. Next weekend will illustrate whether or not we are ready to do so. Whether we are on the path, which will be long and yet could be hope–filled every step rather than wearisome, which will lead us to find ourselves naturally describing our neighbours collectively as part of one community, rather than continue for ever the segregation that has established, in significant places, the tinderbox of the past.”

Dean Mann concluded: “We have a chance to celebrate and remember a crucial moment in the history of this place that showed the determination of a generation of the Protestant people of this island to shape their own destiny. Now, in a different age, we may do the same, but today we do it with everyone, to seek to be two traditions in one community, not limping with one leg stronger than the other, but walking together, not just the length of ourselves, but to the top of the mountain that we need to move.”

During the service the Dean lit a Candle of Hope and Celebration beneath the Cathedral’s Spire of Hope.