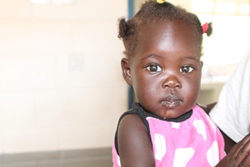 Connor Mission Support Fund is once again open for applications from people in the diocese wanting to be more involved in mission both at home and overseas.

In 2012 the Fund awarded four grants. Mother and daughter Carol and Clare Mulligan of Woodburn Parish, Carrickfergus, were supported in their involvement in a Fields of Life project in Uganda last August.

They were part of a 21–strong team made up of people from all over Ireland to spend two weeks in Kampala and Lira in the north of Uganda. In Kampala the team ran a youth camp based at a high school which attracted around 400 young people

In Lira they painted a Fields of Life primary school and visited a day nursery which cares for children who have lost their parents through HIV/AIDS. They also visited a displacement camp housing refugees from neighbouring countries like Sudan, Congo and Ethiopia.

Daniel Gill from Monkstown Parish received a grant towards his training as a pilot with the Mission Aviation Fellowship in Australia. Daniel featured in the Autumn 2012 issue of Connor Connections and you can read his full story here.

In Yei, the team delivered clergy training, training for youth workers and Dr Dobbs, a GP in Agherton, ran courses for staff at Yei Hospital and the Martha Primary Care Clinic. The team also spoke at a Youth Conference, preached in parishes around the diocese, and took part in the Diocese of Yei Synod. The trip was featured at length in the Spring issue of Connor Connections.

The Mission Support Fund was established to assist people wanting to be more involved in mission both at home and overseas.

Connor wants to deepen a sense of mission throughout all parishes within the diocese but has found the enthusiasm of many individuals keen to get involved is often dampened by a lack of resources to complete the task.

Applications to the Mission Support Fund are invited annually and the application form for 2013 grants can be downloaded here.

Applicants must be able to demonstrate active membership of the Church of Ireland and belong to a parish within the Diocese of Connor.