A warm welcome in Connor for visiting Cambridge choir 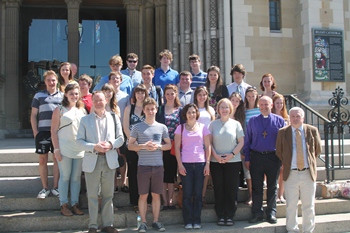 The Choir of Gonville and Caius College, Cambridge, was welcomed to Church of Ireland House, Belfast, for a mid morning reception on Monday July 8 hosted by the Bishop of Connor.

Choir members, who were visiting Northern Ireland to take part in a number of engagements celebrating the quartercentenary of the birth of former Bishop of Connor Jeremy Taylor, were then given a guided tour of St Anne’s Cathedral by Mr Paul Gilmore.

Directed by Dr Geoffrey Webber, the choir performed in St Peter’s Cathedral, Belfast on July 5 and St George’s Parish Church, Belfast and in St Malachi’s Parish Church, Hillsborough where the service was recorded by BBC Radio 3 on July 7. 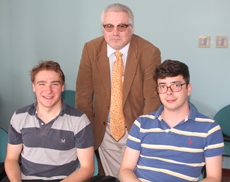 The choir has visited Northern Ireland on several occasions. Among its members this year are four Northern–Irish choral scholar, although for many of the young people this was a first visit to Belfast.

Chorister Stephen Fort said he has enjoyed the engagements in Northern Ireland. “I loved looking around Hillsborough and walking round the lake,” he said.

Catharine Baumann, who has just finished her final year at Cambridge, said: “We have received a lovely welcome here in Northern Ireland.”

Director Dr Webber said the choir had previously recorded an album of Christmas Music in St Anne’s Cathedral. “It is nice to be back, and the tour so far is excellent. We have really enjoyed singing in the city,” he said. 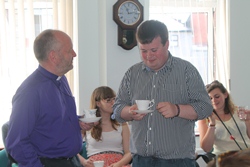 Jeremy Taylor was one of Caius College’s most distinguished Fellows. He became Bishop of Down and Connor in 1661 (to which was added later the See of Dromore) and remained there until his death six years later.

The choir’s visit to Northern Ireland was the culmination of the College’s Taylor celebrations. The tour is continuing in the south of Ireland.

The Bishop of Connor, the Rt Rev Alan Abernethy, welcomed the opportunity to host the choir for the reception. In May this year the Bishop was a guest in Cambridge where he preached at a Service of Choral Evensong marking the 400th anniversary of the birth of Taylor. 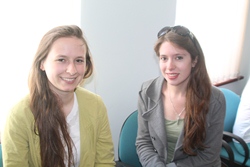 The service was held in The Chapel of Gonville and Caius College where Taylor studied. Bishop Alan said: “The choir was wonderful when they sang during that service in Cambridge and again when they performed in St George’s on Sunday.” 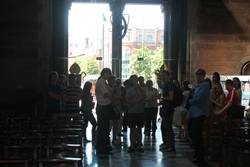 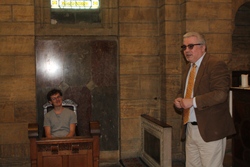 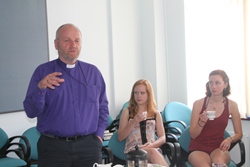 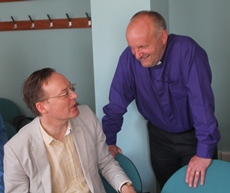