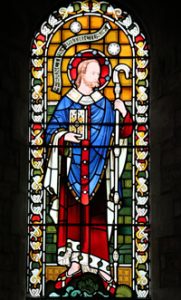 The photograph of the stained-glass window shows Saint Patrick, to whom the church was dedicated. He is shown in episcopal dress; in his left hand is a crozier, copied from a sketch by John H.Bland, Esq., of an ancient Irish crozier now in the British Museum; in his right hand he carries the Gospels. He is standing over a snake, which recalls the ancient legend that Saint Patrick cast the snakes out of Ireland. Photo: John Lendrum.