Service to commemorate the Battle of the Somme @ St Simon’s, Belfast 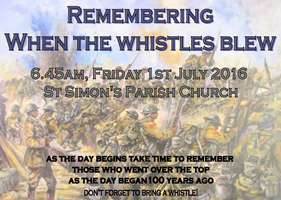 Whistles will sound during an early morning service at St Simon’s, Belfast, on July 1 in tribute to the men from the Donegall and Grosvenor Road areas who lost their lives in the Battle of the Somme.

The ‘Over the Top’ service takes place in St Simon’s at 6.45am. It will be conducted by Priest-in-Charge, the Rev Raymond Moore.

Raymond said: “We wanted to have a fairly quiet opportunity for the community as a whole to come together that morning as there will be a lot of events to commemorate the Somme taking place over the weekend.

“The service will end around 7.25am, the approximate time the Lochnagar mine (the first of 19 deep mines to go off that day) exploded. Marking this moment in history, the church organ will sound a loud blast, and the congregation will move outside into Nubia Street where, at 7.30am, whistles will be blown – commemorating the whistles which 100-years-ago signalled that the men should go ‘over the top.’”

When the whistles fall silent, a Trumpeter will sound The Last Post, there will be a silence before the Ode of Remembrance is said, followed by the Reveille.

Raymond said a number of men from the Donegall Road area had lost their lives in the Somme. The war memorial from St Philip’s (Drew Memorial) – now closed – bears the names of 30 men who died during the course of World War One. The memorial in St Simon’s carried eight names – the Donegall Road was only being developed at the time of the war. A large number of men from nearby St Aidan’s Parish also lost their lives in the Great War, many at the Somme. St Aidan’s will hold a community memorial service for the fallen of the Somme at 3pm on Sunday July 3.

The July 1 service will also conclude St Simon’s 100 days of prayer http://www.100days100years.com/. “We started out 100 days of prayer on Maundy Thursday because I realised that there were exactly 100 days between then and July 1 and so we were encompassing the two major events of 1916, Easter and the Somme,” Raymond said.

He added: “This early morning service, on the 100th anniversary of the battle, will be a service of remembrance and thankfulness for the lives given at the Somme.”