It’s a long way from Ballinderry to Ethopia, but 13 members of Ballinderry Parish Church spent three weeks in the impoverished African country during the summer.

The team helped in a holiday Bible Club at Operation Rescue in Mekelle, where they were enthusiastically welcomed by the children.  During the morning they told Bible Stories, taught the children memory verses, sang choruses did crafts and games.  The group was glad members had crammed their baggage with pencils, stickers, balloons and all the things we take for granted but are absolute luxuries to Ethiopian children.

In the afternoon the team divided into smaller groups and each person went to work at a task best suited to their gifts. One of the places they visited was a school for blind children where the conditions were ‘horrific.’  The team supplied the paint and brushes and employed senior boys from the Rescue Centre to do the painting. Other team members cleaned up, talked, taught and played with the children.  They were also able to buy new mattresses for all the bunk beds in the school.

The team also helped at a Mother Theresa Centre for HIV orphans where they changed nappies, nursed, cuddled and played with the toddlers.  They prayed silently for these children many of whom were HIV positive themselves.  Team leader Karen Salmon was very hopeful that the staff would copy their simple ways of playing with the youngsters.

The orphanage where they had initially intended to do the bulk of their work was not completed so there were no children in residence.  Help was needed in two specific areas – one was to build a swing set which had been donated and the other was to make a large garden in the centre of the building where the swing set would be placed. 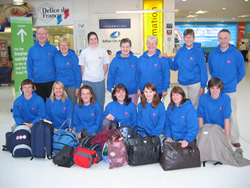 It was certainly not a gardener’s dream world either in conditions or materials but one of the team was able to guide others in what to do.

Perhaps the most precious gift the Ballinderry team brought to Ethopia was 300 copies of John’s Gospel in Amharic language, which they had obtained from Everyhome Crusade in Belfast.  They gave a copy to every child at the Operation Rescue and the remainder to people with whom they had made contact including those who served their food and cleaned their rooms.  Some were also given to people who had attended an English language class for HIV orphans to the Orthodox Priests at the Rock Hewn Churches which they had the privilege of visiting.

Mrs Ray Harris, wife of the Rev Canon Ernest Harris, said one of her lasting memories is of the elderly priest who was so glad to get his own copy of God’s word that he just stopped talking to them, sat down and immediately began to read aloud.
Mrs Harris urged people to pray for the children at the Rescue Centre and for Karen Salmon who does such amazing work in Mekelle.