The Covid-19 restrictions have impacted every age group and level of society, not least our young people, for whom socialisation, physical activity and sharing are vital for mental health.

The annual events which brought young people from parishes across Connor Diocese were cancelled during 2020, and this continues into 2021 as restrictions remain in place.

At a time when young people have been deprived of even time spent with friends at school, Connor Youth Officer Christina Bailie and the youth council have been prolific in producing resources to support them, reduce their isolation, and help them stay connected with their Church.

These include Shaken, which helps young people to consider how they can respond to difficulties they face in life from a Christian perspective; and Right Now, a resource for leaders to use with their young people. In this, leaders, clergy and young people share about their faith during this time.

The council also launched Celebrate, an initiative to celebrate and encourage those doing youth ministry across the diocese, including volunteers, uniformed organisation leaders and clergy.

Connor Youth Council came up with a series of challenges to keep young people busy during the coronavirus lockdown, sharing comprehensive resources for Advent and Easter. Online events include a Games Night and a Worship Night (taking place on March 12).

While the annual Summer Madness Camp, Streetreach and Connor Takes the Castle Weekend had to be cancelled in person, these went ahead online. The virtual Summer Madness Bishop’s BBQ proved a big hit, and young people from 12 different parishes enjoyed tuning in to Streetreach Online in July!

Christina explained: “We tried to replicate the essence of Streetreach with teaching, activity and sharing together. All the ideas for activity could be done by individuals in their own home and on their own which made it accessible to everyone!”

As summer 2020 turned into autumn and restrictions remained in place, Christina produced Possible, a series of videos sharing stories of good practice of churches engaging with people in Covid safe way across the diocese.

More recently, Christina also shared a resource: Developing a Vision for Youth Ministry: Planning the Way Forward in uncertain times for anyone involved in youth ministry in Connor parishes. “While so much remains difficult, I would love to see parishes continue to connect with young people in whatever way possible,” Christina said.

Below are some reports on pre-pandemic activities enjoyed by our young people.

‘An amazing course’ – SERVE a great success in Connor 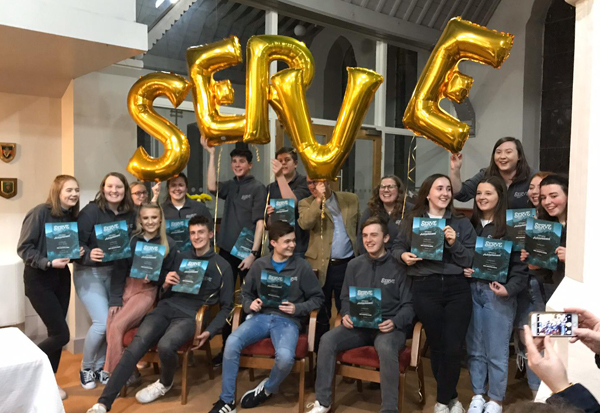 Fourteen young leaders from five parishes graduated from the SERVE leadership course at a special ceremony on November 19 2019.

The graduation, held in St Stephen’s Parish Church, Belfast, was a great opportunity for the young people to showcase all they have learnt – with parents, friends and clergy present to celebrate with them.

The Ven Stephen McBride, Bishop’s Commissary, commended the young people for their commitment to the course.

The young people led worship, prayed, read and shared some of the highlights and challenges of the course.

Euan spoke about the book ‘Storylines,’ which the group has been reading, sharing some of the more baffling questions that have come up as the group discussed a chapter each week.

Stuart, Alex and Sophie shared about the impact of preparing a five minute talk about their faith, which they then presented to others in the group.

Christina Baillie said: “Huge congratulations to the young people who graduated from SERVE. It has been a pleasure to see each of you grow in your leadership and you are each a blessing to your parishes. Thank you to Archeadon McBride for coming and encouraging the young people in their achievement. Thank you to the Rev Jim Carson and Heather Carson along with St Stephen’s Parish for hosting us and providing dinner.”

Christina continued: “We are really expectant about the impact this course will have on the lives of the young people involved and their parishes.”

There was great feedback on SERVE from the young people who took part:

“SERVE is an amazing course and I’m so glad I signed up for it!”

“It helped me be more open to God”

“An absolute pleasure! The most amazing people made it such a joy.” 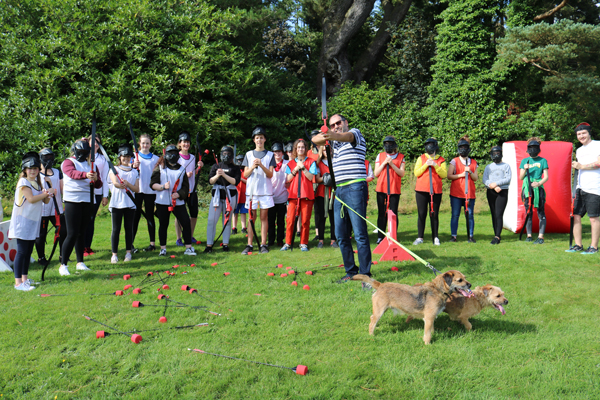 Sessions were excellently led by The Big House, helping the young people discover who God is and how to cope during the storms of life. Worship was led by Catherine Forde and Daniel McDonald from The Hub.

Outdoor activities were hosted by Salt Factory Sports and Soft Arrow Combat with some of the clergy jumping in to shoot an arrow or two! Connor’s Got Talent was, as always, a highlight!

Connor Youth Council expressed thanks to all the youth leaders for bringing their groups and supporting this diocesan event. 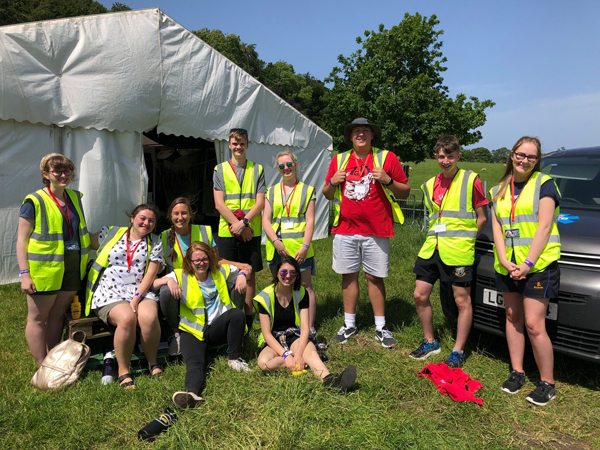 Relaxing at the Connor Sub-Camp at Summer Madness.

It was another sunny Summer Madness, with the number of campers sharing hospitality at Connor sub camp continuing to grow.

Diocesan Youth Officer Christina Baillie said: “It was a great encouragement to have 17 parishes represented, as well as other diocesan guests attending for our BBQ.  There was a marked increase for meals, with at least 50 more people eating with us each day than in 2018.

Another highlight of the festival was Connor Youth Forum sharing their ‘Journey’ resource with a packed out seminar venue. They encouraged those attending to consider how they could use their story to share faith with others, and explained the ‘Journey of Journey!’

Christina said: “A huge thankyou to the Rev Canon Mark Taylor, the Rev David Lockhart, Beverley and Naomi, the Rev Philip Benson, Carolyn and Hannah – who were an incredible team providing the hospitality for our groups throughout the festival.”

US Youth Camping and Serving 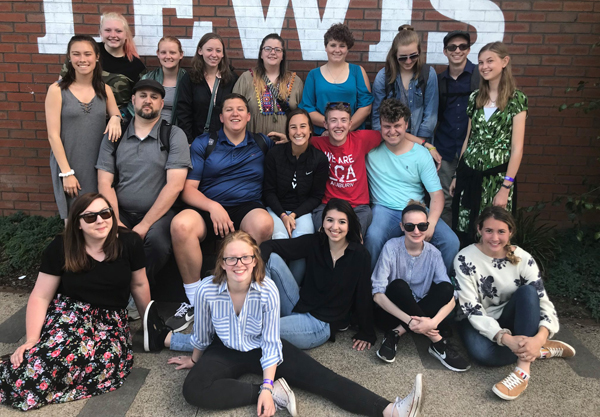 For the third year running, Connor’s young people were pleased to have a Christ In Youth team from America join them for two weeks during the summer.

The team of 18 young people and leaders camped at Summer Madness, serving on Event Crew at the festival, and then became team members at Connor Streetreach in Mossley Parish.

Connor Diocesan Youth Officer Christina Baillie said: “It was fantastic to have two individuals returning from last year’s team, and as always it has been a great encouragement to our young people to develop friendships and share in their faith.” 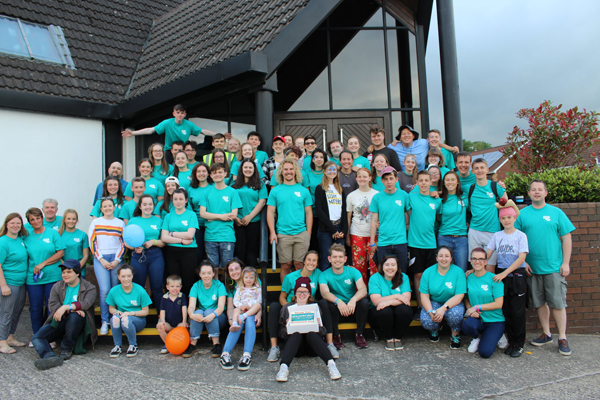 The Rev Peter Jones, rector of Mossley, reflects on the impact of Streetreach 2019

After much planning, preparing and praying, we were delighted to welcome Streetreach to Mossley between Tuesday July 5 and Friday July 5.

Approximately 50 young people from throughout Connor Diocese, and from various parts of the USA, met up in the parish centre after spending some time together at Summer Madness in Glenarm Castle.

Tuesday evening was an opportunity for the young people to really get to know each other and some members of Mossley Parish.  Board games were played, and our American guests were especially interested in how the USA women’s football team would fare in their World Cup game against England!

Shortly after 9.30pm, everyone met in the church for a debrief session (something which occurred on a nightly basis during Streetreach).  On this opening night, various hopes and aspirations were discussed and time was spent in prayer.

Early on Wednesday morning the Streetreach team members were collected from their accommodation in Jordanstown and brought to the parish centre for breakfast.  Following morning worship, final plans were made for the day ahead.  Before bedtime that night, the team would oversee the running of a children’s club, engage in practical work throughout the parish, undertake a series of prayer walks, pay a visit to the summer bowls in the parish centre, pray with people in New Mossley and Ballyduff, and oversee detached youth work.

At the debrief session in the church, it was inspiring and moving to hear of all that took place during the day, and to listen to the many ways in which God had blessed these young people.

On Thursday, the programme followed a similar pattern, and it was encouraging to see the team build solid relationships with various people who live within the parish.  These relationships were evident in the large number of people who came to the Community Fun Day on the Friday, where we had all sorts of games, inflatables, a BBQ and even a visit from Mickey and Minnie Mouse!

It was nice to see the American team in church on Sunday July 7, just before they headed home the following day. They left a prayer roll for us which tells something of the story of Streetreach 2019.  Parishioners of Mossley have made a commitment to use this prayer roll to continually seek God ahead of Streetreach 2020.

Streetreach 2019 was a wonderful time in the life of our parish.  We are thankful to Christina Baillie and the Streetreach team for all their hard work, enthusiasm and dedication.  We are already looking forward to hosting Streetreach again in July 2020! 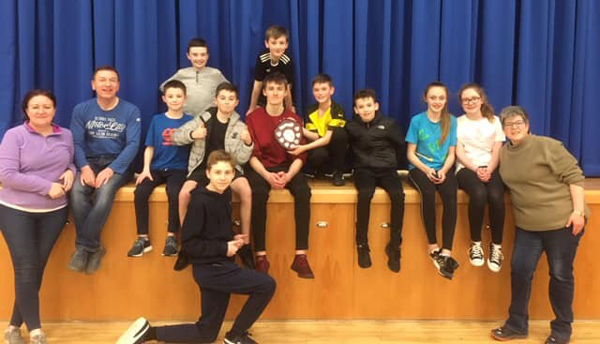 The teams participated in volleyball, sock football, blatterball and 4 square throughout the day. With young people from seven parishes represented, it made for a competitive event.

The groups also took part in tug of war, before the leaders challenged the clergy to see who would come out on top in tug of war!  We won’t report the result but there was a slight numerical bias in favour of the leaders!

After a day of tough competition, the winner of the Big Connor Contest Shield was the host team, St Paul’s, Lisburn.

Christina Baillie, Diocesan Youth Officer said: “Thank you to all the young people and leaders who came along to take part in the event. A huge thank you to St Paul’s Parish for hosting us for the day. Thanks to all the Youth Council members who planned and led the day, making it such a great success.”

Christina added: “It was fantastic seeing groups who were coming along for their first diocesan event, as well as groups who attend regularly, getting to compete against each other.”

© Copyright The Church of Ireland Diocese of Connor 2021