The Bishop of Connor – the Rt Rev George Davison 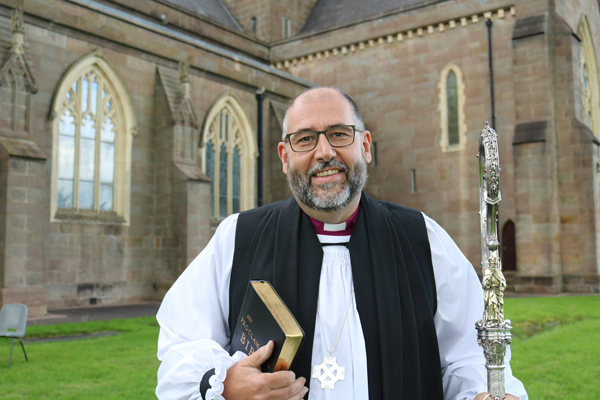 The Bishop of Connor, the Rt Rev George Davison.

The Rt Rev George Davison is the current Bishop of Connor.

Bishop George was appointed by the Episcopal Electoral College for the Diocese of Connor, meeting in the Alexander Synod Hall, Armagh, on February 17 2020.  His Consecration as Bishop of the Diocese took place in St Patrick’s Cathedral, Armagh, on September 3 2020, having been delayed due to the Covid-19 pandemic.

A native of south Belfast, Bishop George has a BD from St Andrew’s University, Scotland. He also studied at Oakhill Church of England College, London and at the Church of Ireland Theological College, Dublin.

He was ordained a deacon in June 1992 at a service in St Patrick’s Cathedral, Armagh, and served his curacy in St Mark’s Parish, Portadown.

In October 1995 Bishop George was appointed rector of the Parish of Kinawley and Holy Trinity, Derrylin, Co Fermanagh, a small rural parish bordering Co Cavan in the Diocese of Kilmore.

He remained rector there until his institution as rector of Carrickfergus in June 2009. In Kilmore, he was Diocesan Director of Ordinands, and Archdeacon of Kilmore.

In November 2011 Bishop George was elected Clerical Honorary Secretary of the General Synod of the Church of Ireland.

He was appointed Archdeacon of Belfast in June 2013, and was Archbishop’s Commissary since the retirement of Bishop Aland Abernethy’s in December 2019.

Bishop George is married to Nadine, and the couple have two grown-up children.