Bishop of Connor part of delegation to meet Sinn Fein 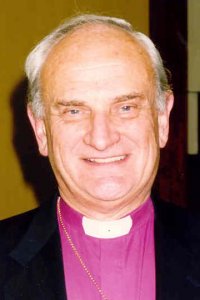 The Bishop of Connor, the Right Rev Alan Harper, was among a delegation of Bishops from the Church of Ireland to meet with representatives of Sinn Fein at Stormont on Monday October 23.

The Sinn Fein delegation was headed by party leader Gerry Adams. Following the meeting, Archbishop Robin Eames said the Bishops of the Church of Ireland were engaging in a process of engagement with the political parties in Northern Ireland. "As Bishops representing the church, which operates in both jurisdictions of this island, we are pleased to have the opportunity to engage in dialogue with Sinn Fein,"

Archbishop Eames said. "The Bishops view the current political situation as an opportunity for progress towards democratic structures to serve the whole community in Northern Ireland." During the meeting the Bishops stated their belief that political and social progress would only be achieved by full and equal participation in the structures of democracy with support for policing.

The delegation encouraged Sinn Fein in its plans to consult on this issue with those providing its political mandate. "As Bishops, we have stated our own commitment to articulating the values of fairness and equality at every level of community life. We acknowledge the ongoing existence of sectarianism within all parts of our society and our responsibility to give leadership within our own Church and beyond to end such practices," stated Archbishop Eames. "This was a positive meeting. Both delegations exchanged views on a wide range of issues, including collusion, the issue of the disappeared and concern regarding parades. A range of social justice issues was addressed including education, the Church's initiative on child poverty, the review of public administration, water charges, rates and health issues, as well as concerns about suicides in Northern Ireland."