Celtic Spirituality weekend – thinking from a different point of view

A Celtic Spirituality Weekend at St Nicholas Parish Church, Belfast, has been pronounced a ‘fantastic’ success.

Sponsored by the Diocese of Connor, the weekend got underway on the Friday morning with a session for clergy and church workers Tools for inspired leadership – a vision for the future. A small but keen gathering listened to a presentation by Rev Simpson, and had the opportunity for questions and discussion.

That evening an audience of more than 50 enjoyed Rev Simpson’s address on the theme Celtic Spirituality for the 21st Century.

A Celtic Eucharist was held on the Sunday morning and the theme of the eveningservice was The healing of the land.  Liturgies from the communion on Holy Island were used on both occasions, and more than 100 attended each service.

Rev Grace Clunie, rector of St Nicholas’s, said it had been a fantastic weekend.
“It brought a lot of people from different places into our church, and on Sunday we more than doubled our usual attendance,” she said.

“Ray takes great joy in just being with people and in stimulating new thought. He was promoting his community life as well as encouraging people to come to Lindisfarne as a pilgrimage.

“He is interested in resurrecting pilgrimage as a spiritual journey, and reminding Christians of their inheritance. We have inherited a wonderful tradition, especially here in Ireland.” 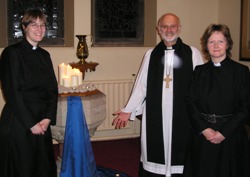 Rev Clunie said the weekend attracted visitors form other churches including the Roman Catholic, Presbyterian and Methodist churches.  “Even the less conforming churches were represented because this looks back to an era when the church in Ireland was not so closely aligned with Rome and that in a sense unites us – one church and we were all the same and not so divided.”

She added: “The weekend provided people with an opportunity to think from a different point of view.”