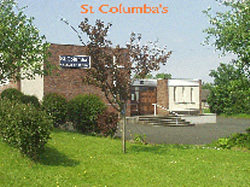 St Columba’s Parish Church, Dunclug, has been awarded first prize in the post -1900 category of a competition run by the Ulster Historic Churches Trust.

Following the announcement of the award at a special ceremony on December 6, Canon Stuart Lloyd paid tribute to the band of volunteers who keep the church building and grounds in such good condition.

The prizes were awarded for well-maintained places of worship and the panel of judges included people who have a background in architectural conservation. The awards were presented by Paul Clarke from UTV.

St Columba’s is a multi purpose building, and is dedicated to one of the great saints associated with the Celtic Church , St Columba, who worked in the 6th century.

The church was built in 1975 in response to new housing developments in the area. In the early days most of the people came from the immediate area, but today the members of the church are drawn from throughout Ballymena.

Canon Lloyd said: “This is good news for the volunteers who do most of the work at the church. St Columba’s is beside the Dunclug Housing Estate which has been in the news at times and we have had trouble. The church has been burnt in the past but there is a group of people who faithfully keep the grounds outside and do most of the work inside as well.

“The judges obviously felt they were doing a good job.”

Founded in 1995 the Ulster Historic Churches Trust promotes a wider understanding of Ulster's historic churches and disseminates information on how best to maintain them.