Bishop of Connor sits out with Black Santa 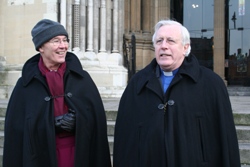 The Bishop of Connor, the Rt Rev Alan Harper, donned his woollies and warm clerical coat to support the annual Black Santa sit out in front of St Anne’s Cathedral.

Keeping him company was the Black Santa himself, the Dean of Belfast Dean Houston McKelvey, and Rev Tim Close, the Dean’s Vicar.

At other times other members of clergy from Connor Diocese have ‘sat out’ as part of the now famous charity project.

The Black Santa tradition at Belfast Cathedral was started in 1976 by Dean Sammy Crooks who, concerned at the emphasis being placed on necessary and costly building programmes at the Cathedral, decided to stand on Donegal Street and beg for the poor and charitable causes. 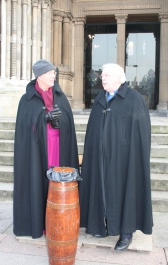 With a small barrel in which donations could be placed, and dressed in the familiar black, Anglican clerical cloak, Dean Crooks sat out each day of the week before Christmas. The term ‘Black Santa’ was coined by the local press.

Dean Crooks was succeeded by Dean Jack Shearer who involved members of the Cathedral Chapter in the sit out. Under his leadership the event continued to develop so that by his last sit out in 2000, a total of £2.2 million had been raised for charities over the previous 24 years.

All the money gathered is donated to local charities with a portion given to Christian Aid.

Dean McKelvey said: "The sit out fully demonstrates the charitable nature of the overwhelming majority of people in this part of Ireland. To be the leader of the team organising the sit out is a tremendous experience which is only surpassed by actually being at the receiving end of so much generosity. The experience is breath-taking both physically and spiritually. Charity is indeed the greatest of the Christian and human virtues".

Bishop Harper has taken part in the sit out for the past 11 years. “It is one of the most rewarding things that I do because you meet people from every art and part of the city and further afield and you meet them at their very best,” he said.

“The generosity that they show is quite outstanding and could not be matched anywhere in the world. It is a privilege for me to take part in it and it raises my spirits every year just to spend an hour or two shaking hands with people who are so generous.

“It is a great witness to Christmas as it should be.”

Donations may be made at any time of the year, by sending a cheque made payable to "Cathedral Sit out" to the Dean, at Belfast Cathedral, Donegall Street, Belfast BT1 2HB.