Installation of new Archdeacon of Dalriada 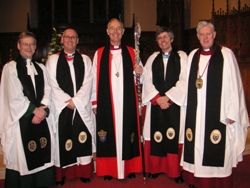 The Venerable Stephen Forde, Rector of Larne and Inver with Glynn and Raloo, was installed as Archdeacon of Dalriada, Diocese of Connor, on Thursday January 4.

The installation, by the Dean of Connor the Very Reverend John Bond, took place in the Chapter of St Saviour, Connor, in Lisburn Cathedral.

The Venerable Gregory McCamley, Archdeacon of Down, was the preacher, and the Bishop of Connor the Rt Rev Alan Harper pronounced the Blessing.

A native of Rathfriland in County Down, Rev Forde later lived in Downpatrick and attended Campbell College in Belfast. He gained a degree in architecture at Edinburgh University before training in theology at the Church of Ireland Theology College, Dublin. 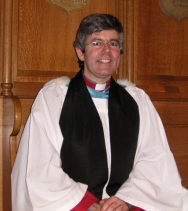 Rev Forde was ordained in 1986 and was curate at St Mary’s, Crumlin Road, Belfast, until 1989 when he was appointed Chaplain, or Dean of Residence, at Queen’s University.

In 1995 he was made Rector of Booterstown and Mount Merrion in the Diocese of Dublin, and during this time was Chaplain to UCD and Chaplain to Blackrock Clinic.

He returned to Connor in 1999 as Rector of Larne and Inver with Glynn and Raloo, and was appointed Carrickfergus Rural Dean in 2001.

Rev Forde met his Scottish wife Fiona at university and the couple has three children.

Anticipating his new role, Archdeacon Forde said: “It will be a challenge to balance the work of a busy parish with the demands of being an Archdeacon. I want to help the church and the diocese to be fit for the 21st century.

One of the first duties of the new archdeacon will be to represent the diocese during a visit to Connor’s link diocese in Yei, Southern Sudan, later this month. This partnership was formalised at the last Diocesan Synod.