Archdeacon of Belfast takes the Declarations 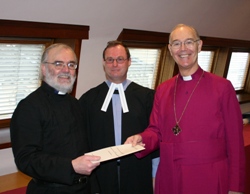 Canon Barry Dodds, new Archdeacon of Belfast, took the Declarations in the presence of the Bishop of Connor, the Rt Rev Alan Harper, and the Rev William Taggart, Registrar of Connor, on Friday, January 26.

Canon Dodds, rector of St Michael’s in Belfast’s Shankill Road, was appointed the first ever Archdeacon of Belfast, Diocese of Connor, by the Bishop earlier in the month.

Traditionally Connor had two archdeaconries – Connor and Dalriada. The creation of a new Archdeaconry of Belfast was agreed at the Diocesan Synod last October.

Canon Dodds said he was very honoured to be asked by the Bishop of Connor, the Rt Rev Alan Harper, to take on the role of Archdeacon.

Rector of St Michael’s for 26 years, the 63-year-old has spent his entire Ministry in Belfast.

A prominent member of the Loyalist Commission since its inception, Canon Dodds has been involved in negotiations with all elements of Loyalism in the area to overcome feuds and broker peace.

He is also a member of the Good Relations Panel at Belfast City Hall, and is Chair of the Protestant Orphans Society, now known as the Church of Ireland Orphans and Childrens Society.

He is Rural Dean for Mid Belfast and has been Connor Diocesan Secretary since 1999.

A native of Comber in Co Down, Canon Dodds attended Annadale Grammar School. He joined Eagle Star Insurance in Belfast, and later moved to work for the company in London and Cheltenham, branching into computer systems analysis in the 1960s.

He returned home in 1970, working in computing in Dungannon before embarking on the Ministry.

“I had been involved in church work as a bible class teacher and youth work leader, and was asked to think about doing lay readership. I did that and was later challenged and felt it was God’s will to offer myself for ordination,” said Canon Dodds.

He studied for the Ministry for three years in Dublin, at the same time completing an OU Degree. He graduated from both courses in 1976, and in June that year was ordained curate in St Jude’s, Ballynafeigh. He was instituted rector of St Michael’s in June 1980.

Canon Dodds is married to Norma and the couple have three children and eight grandchildren.

Speaking of his appointment, Canon Dodds said: “I am delighted and honoured by the opportunity and challenge that has been given to me. My entire Ministry has been in the city of Belfast. Carbon monoxide and concrete flow in my veins.

“Being a prototype in anything, you need to be prepared to be flexible. There is no line for me to follow,  and there is no danger of me being a clone of a previous Archdeacon of Belfast. But I hope whatever line I set and steer it will be good for the future of this new archdeaconry.”

A date for Canon Dodds’ installation has yet to be set.