Menu
Home > News > Archdeacon of Dalriada in visit to Sudan

Archdeacon of Dalriada in visit to Sudan 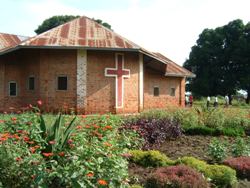 The new Archdeacon of Dalriada, the Ven Stephen Forde, is in southern Sudan this week bringing greetings from Connor to its new partner diocese of Yei.

Archdeacon Forde will attend and lead devotions at the Yei Diocesan Synod, which meets every three years. He will also bring greetings from the Rt Rev Alan Harper, Bishop of Connor and Archbishop Elect, to Bishop Hillary and all in the Diocese of Yei.

One of the purposes of the visit is to formally sign the partnership with Yei, agreed at the Connor Diocesan Synod in October last year.

“I will be exploring what the partnership will mean, what we are bringing that the church in Yei will find helpful and what they can bring to us,” said Archdeacon Forde before his departure on January 21.

“This partnership will be different than those we have with Linkoping in Sweden and Edinburgh because the distances between dioceses are quite extreme and set in very different contexts.

“There are some parallels. They are emerging from 20 years of civil war as we in Northern Ireland are emerging from a conflict. In Sudan one million Sudanese were killed during the war and two million displaced. As a church they are starting virtually from scratch as the population returns to its homeland.

“There are issues both dioceses have to grapple with such as how to deal with conflict, spirituality and trust and how to put the conflict behind us. These are the sort of things both churches share.”

Archdeacon Forde said the Cathedral in Yei was pockmarked with bullet strikes, an indication of the ferocity of the fighting in the past. The grounds of the local hospital, taken over by the Sudanese People’s Liberation Army as a headquarters, are littered with shattered bomb shelters and rusting military vehicles and hardware.

“These are a reminder of the real war Sudan experienced and we want to see how as a diocese we can help,” said Archdeacon Forde.

“That will be by support through prayer and support through resources, but it is not just about us giving money and Yei being a dependent recipient. It has got to be a partnership, and I want to find out what they have to share.”

Archdeacon Forde is accompanied on his trip by Brian Lavery of the Church Mission Society. The Yei Diocesan Synod takes place on Thursday January 25.