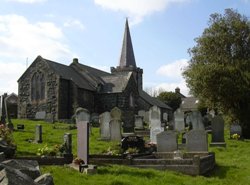 The new Archbishop of Armagh and Primate of All Ireland, The Most Reverend Alan Harper, visits Cairncastle on Sunday February 4, just two days after taking up office.

He will be officiating and preaching at a special service of rededication in the historic St Patrick’s Church, following an extensive nine-month restoration project. This will be Archbishop Harper’s first Sunday engagement in his new role.

Parishioners will join guests including the Archbishop’s wife Mrs Helen Harper, the Mayor of Larne Alderman Danny O’Connor, local councillor Gerardine Mulvenna, and representatives of the St Patrick’s restoration team at the 11.30am service.

Music will be provided by the combined choirs of the two churches in the Parish of Kilwaughter and Cairncastle with All Saints’ Craigyhill.

During the service four plaques will be dedicated in memory of former parishioners, one of which records a donation towards the restoration fund from the sale of Millbrook School, which was originally co-founded by members of the parish.

After the service church members and guests will relax at a parish lunch in the Halfway House Hotel.

Roger Thompson, Rector of the Parish, said: “We are thrilled that the Archbishop is officiating and preaching at our little church on his very first Sunday as Primate. This will ensure that it will be a really special day.

“The parish is grateful to all those who have worked so hard to get us to this point.  We are especially thankful for the £94,200 grant from the Heritage Lottery Fund, as well as the huge ongoing fundraising drive by parishioners which has helped return the church to its former glory.

“Having worked so hard to restore the church building, we can now look to the future with hope”

The building, constructed in 1815 on the site of a much older church, needed extensive refurbishment, from re-pointing work on the external walls to storm glazing on the rare ‘Meyer’ East Window and repairs to the spire, floor and roof. All the preservation work, however, was carried out in keeping with the church’s original character.

Visitors can view the famous inscribed font in the church, which was reputedly used by the renowned author, Jonathan Swift, and presented to the parish by a Miss Faloon of Larne. A further link between Dean Swift and the church is that historians hold the theory that he named Lemuel Gulliver, the hero of his famous ‘Gulliver’s Travels’, after Archdeacon Lemuel Mathews who was the Prebendary of Cairncastle from 1667.

The service of rededication comes only weeks after the Heritage Lottery Fund announced it has awarded over £30 million to places of worship in Northern Ireland over the years, benefiting over 130 projects.