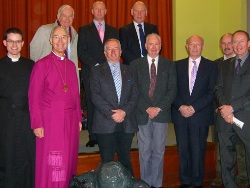 An appeal for clothing and other items to help improve the lives of disabled children and their mothers in a Russian orphanage received a fantastic response.

Members of Agherton Parish Men’s Society, Portstewart, who only launched their appeal on the second week in January, loaded more than 300 bags of clothes, duvets and blankets bound for Minsk into vans on Friday January 26.

The donated items will be sent to an orphanage where they will benefit children and their mothers who in many cases are turned away from home by fathers when the children’s disabilities are discovered.

The appeal also raised more than £500. Much of this will help offset the cost of transporting the goods to Russia, but £200 was used to purchase new fleeces and hats from local business the Portstewart Clothing Company, who sold them at a fraction of the normal price.

This was Agherton Men’s Society’s first big charity drive. The Minsk project was suggested by member Robert Dixon, who felt it would be worthwhile to support the work of Limavady man Jarvis Nutt, who owns the orphanages and who regularly travels to Minsk with food and clothing.

The goods which left Portstewart on Friday were transported to Limavady by Garvagh man John McGinley. The donations will be taken on to Minsk by Mr Nutt in March or April.

Mr Dixon said there is no middle man. “I am certain that every item of clothing and every penny collected will end up in the right place,” he said.

He added that the response from parishioners and visitors had been fantastic.  “It was unbelievable. We probably got five times more than we expected,” he said.