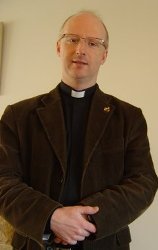 The institution of the Rev Stephen Fielding as rector of Agherton Parish, Portstewart, took place on Tuesday April 17.

Rev Fielding succeeds Dean Patrick Rooke, former rector and Archdeacon of Dalriada, who moved last year to the position of Dean of Armagh.

A native of Londonderry, Rev Fielding was most recently incumbent of the united parishes of Templepatrick and Donegore.

The 39-year-old has a degree in Economics and Geography from the University of Ulster at Jordanstown, and worked as a geological technical assistant in London before studying theology at Trinity College, Dublin.

After his ministry training he was nominated to the parish of Bangor Abbey, Diocese of Down, by Dean Hamilton Leckey, and served as a curate there for four years under Dean Leckey and later Canon Ronnie Nesbitt.

In 1997 he was appointed to the parishes of Templepatrick and Donegore.

Rev Fielding is married to Julia and the couple has two young children. He said: “This is a good time of year to be moving. Agherton Parish is in a lovely scenic part of Ireland.

“I am looking forward to the challenges that lie ahead and to meeting my new parishioners and working with my colleague the Rev Niall Sloane. I will be hoping to build on what has been achieved by previous rectors.”

Preacher at the service was the Ven Dr Stephen McBride, Archdeacon of Connor, who also instituted Rev Fielding.  This was the first time in almost 100 years that a Connor rector has had to make his declarations before the Primate, as there was no Bishop in Connor following the appointment of former Bishop Harper to the position of Archbishop of Armagh.