A charity talent show took place in St Stephen’s Parish Hall on Saturday April 21 to raise funds for a Belfast baby who is battling a rare illness.

The Rev Edith Quirey, Priest in Charge of the united parish St Stephen’s and St Luke’s, said children in the Sunday School had been so touched by the plight of little Dylan Dicks, they wanted to do something to help the 10-month-old.

Dylan, from the Shore Road area, is suffering from Tay Sachs Disease (TSD), which at present has no cure. He is currently in German where he is having a course of chemotherapy before undergoing a potentially life-prolonging bone marrow transplant next month.

Paediatricians hope the procedure will halt the progression of the Dylan’s disease which could otherwise kill him before his fifth birthday.

It is believed Dylan is one of only six people diagnosed with TSD in the UK in the past 20 years. It will cause Dylan to become blind, deaf and eventually paralysed before dying if a cure is not found. 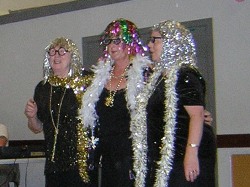 Rev Quirey spoke to Dylan’s mother Carrie Davidson before the talent show. The family has so far raised more than £80,000 for the Dylan Dicks Appeal, and although the Eastern Health Board recently agreed to pay for the operation in Germany, at a cost of £100,000, fundraising events are continuing and the appeal will remain open as the family says they do not know what lies ahead.

Saturday night’s show was compered by parishioner Agnes Young, and Rev Quirey was among the many game folk to take part.