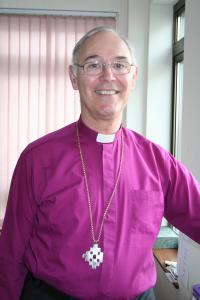 The changing political face of Northern Ireland was top of Archbishop Alan Harper’s agenda when he delivered his first presidential speech as All-Ireland Primate at the Lyrath Estate Hotel, Kilkenny, on May 8.

Describing these as “amazing and rapidly changing times,” the Archbishop said news that the UVF was to stand down was “a significant step along the road to the complete removal of paramilitary violence from our society and an investment in peace building and the normalization of the political process.”

Referring to the restoration of devolution in Northern Ireland, which coincided with the first day of synod, he said it was important for the church to send a clear message of support to those entering executive office.

“Much trust has been placed in them; much is expected of them; the hopes and dreams of millions in this island for a constructive, shared future, marked by justice, equality and mutual respect, lie squarely upon their shoulders,” the Archbishop said.

The Archbishop said most of his remarks would have a self consciously domestic focus. “Radical and exciting change in the life of our church is beginning in some areas and called for in others,” he said.

Addressing the issue of the General Synod, the Archbishop said it had an important role in furthering the mission of the Church, but was not working as well as it should and could.  “Whether by age or accident the synod is now failing effectively to communicate its message in ways that resonate with the needs of the 21st century,” he stated.

He said he believed boards and committees should give shape and direction to the debate which their work should provoke by putting down motions to enable the house to express an opinion or adopt a direction in response to that work.

The Archbishop went on: “Everyone knows that there arises with monotonous regularity the question of “Who speaks for the Church of Ireland and with what authority?” The definitive answer to that question should be that this synod speaks for the Church of Ireland, but this can only happen if issues and options are placed before synod for determination.”

By way of example the Archbishop said he would have welcomed a motion which seeks to commit this synod to requesting all parishes and dioceses to undertake an ecological and environmental audit of their activities, under the guidance of the sub committee, with the aim of establishing eco- friendly best practice in all that the Church of Ireland does.

“If such a motion were to be accepted then we should have embarked upon a very practical course of action which makes real what we say we believe on this issue,” he said. “In fine, I do not believe that it is sufficient to outline considerations and present information in the form of essentially historical accounts of past business. We need to express ourselves in specific terms and to address issues in an ordered and focused fashion. We need to know what we think and say what we know and do what we say.”

The Archbishop said it had been pointed out that the present structures of the Church were strong in the areas of representation, safeguards, and the maintenance of ethos, but that key weaknesses included: a lack of clear understanding of where policy is set; a lack of defined short term priorities; a fatal separation of decision making on policy from decision making on resources; and a lack of clarity on who makes the ultimate financial decisions and what criteria are used in making those decisions

These views, and more, he said, had been expressed by a prominent lay person in the Diocese of Connor, and should be listened to.

He suggested that instead of the already underway review of existing committee structures, a somewhat different exercise was called for – one in which bishops and the Honorary Secretaries sit down, together or separately, to consider the best structures for dealing with these concerns.

The Archbishop said that for the past five years he had chaired the Board for Social Responsibility (NI).  “During that time I have been fully aware that the work we have been doing has little underpinning in the form of a coherent Theology of Social Engagement. Meanwhile, with little or no correspondence between us, the Church in Society Committee has been thinking theological thoughts on a whole range of social issues but has little practical engagement with any of them. There is no joining up of theology and action. I do not think that this makes sense. I do think that what we need is, perhaps, a Division of the Church concerned with coordinating theology and social action.”

Because of limitations of the Trust, the RCB cannot easily allocate funds for many of the purposes which the General Synod might wish to promote, the Archbishop said.

He said he would like to see the creation of a Central Projects Fund so that the work of the Boards and Committees of this synod would have resources to draw upon when developing their work. “We must become a Church which does its work efficiently but which is also properly resourced,” Archbishop Harper added.

He went on to refer to issues surrounding the Review of Public Administration and Education in Northern Ireland.

In the 1930s and 1940s the Church of Ireland transferred their schools into the control of the state, the Archbishop said, on the understanding that these were “church related schools” and that the transferor churches would retain a role in the governance of those schools and that their ethos would be protected. But he claimed the influence of the churches had been whittled away, and under current proposals would be further reduced.

“I believe that education is much more than merely the transmission of knowledge and that education should never be morally neutral or ethically ambiguous. We are seeking to educate the whole person and we require to maintain and develop a society with strong and coherent moral and spiritual values. I believe that those moral and spiritual values are most exquisitely and perfectly expressed in and through the revelation of God in Christ and I make no apology for holding such a conviction. I therefore believe that in all schools, but especially church related schools, there should be overarching principles and emphases which we need now to advocate.”

Welcoming the initiative of An Taoiseach in initiating high level structured dialogue on government policy with stakeholders including the Church of Ireland and the modest structures for similar dialogue established at Civil Service level in Northern Ireland, the Archbishop said: “The Churches have an important role to play in shaping future society here in Ireland. My aim is that the Church of Ireland should be fully fitted to engage effectively in such a dialogue and that our voice should be clearly heard. I commend that aspiration to the General Synod.”