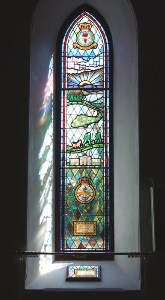 The Royal visitors were the special guests at the dedication of a new stained glass window to commemorate service people, their families and civilians who worked and served at RAF Aldergrove during Operation Banner.

Operation Banner was the operational name for the British Armed Forces’ support for the RUC and later the PSNI in counter-terrorism and public order operations to assist the British Government restore normality in Northern Ireland.

The service in St Catherine’s, which is located on the RAF base, was organised by Group Captain DJ Stubbs, Commanding Officer of RAF Aldergrove, and members of St Catherine’s.

Because the incumbency of St Catherine’s is vacant, guests were welcomed by the Rev Paul Redfern, Rural Dean of Antrim, who spoke of the symbolism of the beautiful window, created by artist Ann Smith.

At the top of the window is the sun rising over the hills of Antrim and the waters of Lough Neagh, representing a new beginning for Northern Ireland.

“The sun reminds us of God’s grace, bringing us through troubles to the place of peace we now have,” said Rev Redfern.

Below is an image of a Wessex helicopter, which Rev Redfern said flew many missions of mercy, rescuing many souls from danger, and two soldiers representing all the service personnel who have served at RAF Aldergrove.

The window also features a dog, an animal which played a special part in protecting people and places and entertained at shows and events, helping to raise huge amounts of money of many charities.

Stormont Castle is included in the window. Rev Redfern said: “Stormont is now a place where men and women of goodwill, duly elected from all parts and persuasions of Northern Ireland society can work for the peace of all.”

During the service, a memorial plaque below the new window was unveiled by the Prince of Wales and Duchess of Cornwall.

In his prayer of dedication, Rev Redfern said: “Almighty God, our Heavenly Father, your son taught us that ‘Greater love hath no man than this, that he lay down his life for his friends.’

“Please bless and hallow this memorial window dedicated to all Navy, Army and Royal Air Force who served in this station to ensure safety, good order, protection and peace in this province.

“May all who view this memorial be inspired, encouraged and moved to be thankful for the sacrifices made and the selfless commitment to service given.”

The church was packed to capacity with more than 150 invited guests including service personnel and their families and local parishioners.

Rev Redfern said: “St Catherine’s is the church of the base and has been very much involved with the Royal Air Force from the earliest days. The Church has memorials of service men killed in the second world war and since. It has always had a strong connection with the RAF and it is most appropriate that the church itself should carry the memorial.”

Due to the improving security situation, Operation Banner officially ends on August 1. The Operation saw 763 Service deaths and 6,100 injuries caused by terrorists.