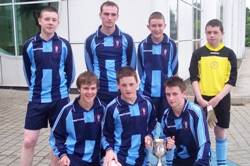 St Andrew’s, Glencairn, won the Connor Challenge Cup for the second consecutive year in the annual youth competition which took place in Ballyclare on June 2.

All parishes were invited to enter a team. The Rev Mark Taylor provides this colourful report of the day’s events:

The gathering was at the Sixmile Leisure Centre in Ballyclare, a central and neutral ground for the competition to be played out.  Resplendent in the colours of their team they stood proud, fearless of all but defeat.  The order of combat was declared and they faced off against each other.  The whistle blew, it came sailing through the air and as it touched the ground it was “game on”.  The Connor Diocesan Youth Council 5-a-side Football Competition for 12 to16-year-olds was off and running.

Split into two groups the competition was fierce.  The ball was passed with skill, and sometimes a little luck, from player to player.  The disappointment for the attackers was mirrored by the delight of the defenders at each save.  A goal scored stiffened the resolve of the defenders and the attackers alike.  One down, one each, two one up; and all the while waiting for that final whistle to blow to bring the match to an end.

After a tense and thrilling competition the team from St Andrew’s won out in Group A.  They were then faced with their toughest match, against a superb team from St Patrick’s, Armoy (the group B winners).  After all the group matches and the play offs it was amazing that they had the energy left for the final.  They gave it their all.

The whistle blew, the ball was in play, and the goals started to come.  The display was worthy of professionals.  The final whistle blew and St Andrew’s had won, the cup would return with them to Glencairn.  After all their efforts St Patrick’s Armoy were devastated, such was their commitment to the game.

Who will dare to stand against these “masters of the yellow ball” when the challenge is issued again?  Does your parish have the capability to withstand the might of these great teams?  Prepare yourselves and answer the challenge next time you hear the call.

A word of thanks to all those who took part – without you there would be no competition.  The level of sportsmanship and fair play displayed by all the players is worthy of comment and praise. Thanks especially to those youth leaders who brought their young people to Ballyclare.  The Youth Council really appreciates all the effort that you are putting in all year and not just for this competition.

A special word of thanks to Alan Ross for bearing the brunt of the organising AND the refereeing.

See you next year!