Rector sets out on Cut the Carbon march 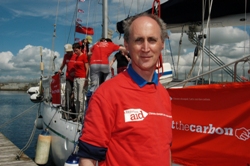 The Rev Neil Cutcliffe set off on a 1,000 mile hike on July 14 to highlight the impact of global warming in developing countries.

Rev Cutcliffe, rector of Mossley parish, Newtownabbey, is participating in Christian Aid's Cut the Carbon march from Northern Ireland to London – a challenge which will take 80 days.

The march got underway at Bangor Marina on Saturday, July 14, and aims to raise awareness of the devastating impact global warming is having on millions of poor people in developing countries.

“I have been involved in organising Christian Aid Week for years, but my knowledge of global warming was fairly scanty,” Rev Cutcliffe said. “I was concerned about it, but not really in the way I should be. Once I was accepted for the march I began to read up about climate change, and have been to two training days in London.

“People see this as a problem for the future, they worry about how it will affect their families. They don’t realise that it is already impacting on people in developing countries.” 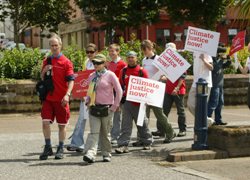 Rev Cutcliffe is one of 20 marchers, including 10 of Christian Aid's overseas partners,  to sail from Bangor to Troon in Scotland in a flotilla of yachts at the launch of the march.

The 11-week walk will go via Edinburgh, Leeds, Birmingham, Cardiff and the Labour Party conference in Bournemouth before arriving at the London Stock Exchange on October 2. Here the participants will call on companies trading inside the London Stock Exchange to publish a full account of their global carbon footprint in their annual reports and commit to at least a five per cent cut in CO2 emissions per year.

In order to take part in the event, Rev Cutcliffe had to give up plans he already had for July – he is a keen bottle collector. Not an easy decision, he admits. “But the boy upstairs said forget the bottles, they will be there next year,” he joked. 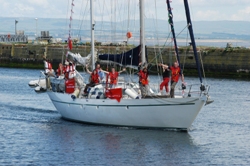 The 56-year-old is taking a sabbatical, and leaving behind his wife Audrey, sons Matthew and Gareth, and 13-year-old daughter Zoe.

An experienced long distance walker, Rev Cutcliffe has in the past taken part in a variety of events including  a hike from John O’Groats to Lands End with parishioners, and the Four Peaks challenge for charity.

The only participant from Ireland north or south, he says he will be representing all the churches in Ireland during the event. He is due to chat to Stephen Nolan on BBC Radio Ulster every Monday morning during the walk. Readers can also keep up with Rev Cutcliffe's progess on our own Connor Diocesan website.

The march will visit 70 towns and cities from Bangor to London. More than 50,000 people are expected to get involved along the way by joining the walkers on parts of the route and attending rallies and demonstrations across the UK. Along with his fellow marchers, Rev Cutcliffe, the only clergyman taking part, will be lobbying MPs, government officials, and representatives of major companies.

“This is not just about walking, it is about lobbying, meeting MPs and stopping off at major companies, talking about the problems of global warming, which will be quite challenging,” Rev Cutcliffe said. “If there was just the walking it wouldn’t be so daunting. I hope to do more walking than talking.”

Through the Cut the Carbon march, Christian Aid is also calling on the UK government to:
• Develop a mandatory standard that companies can use to calculate their CO2 emissions.
• Require companies to publish details of their CO2 emissions using this standard.
• Push for a fair international agreement that will deliver at least an 80 per cent cut in global CO2 emissions by 2050.