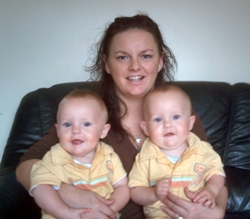 Rev Paul Dundas, rector of Christ Church, Lisburn, will be stepping out over the top of Belfast’s Europa Hotel in a bid to raise funds for the neo-natal until at the Royal Maternity Hospital.

Paul is taking part in a sponsored abseil, along with parishioners John Greer and Gary McCarter.

John and his wife Davina experienced at first hand the lack of vital facilities at the Royal’s neo-natal unit in the days and weeks after Davina gave birth to triplets in August last year.

When the couple discovered they were expecting three babies, they were told it was likely the boys would arrive between 28 and 32 weeks.  At 27 weeks Davina was admitted to the Royal Maternity Hospital, Belfast, but as they didn’t have room in the neo-natal unit for three babies, she was taken to Scotland Princess Royal Maternity in Glasgow.

Six days later, a scan revealed that the oxygen and blood flow going to one of babies was being restricted.  Following an emergency C-Section on August 7 2006, the triplet boys were born at 12.11, 12.13 and 12.14pm.   Charlie came first weighing 2lb, Owen was next weighing 2lb 2oz and Harry was third weighing 1lb 12oz. 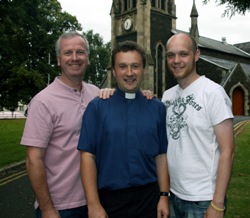 The boys were taken immediately to intensive care and had to be ventilated as they couldn’t breathe on their own.  Sadly, little Harry took an infection and died on August 30.

Davina and John's experience showed them how underfunded these units are and together with Paul and Gary,  John hopes the sponsored abseil on September 22 will help bring in funds for the Neo Natal Unit at the Royal, which houses the regional neo natal unit for the whole of Northern Ireland.

The Christ Church Parish team is has appealed for generous support for this daring endeavour.

Story and photos by John Kelly.