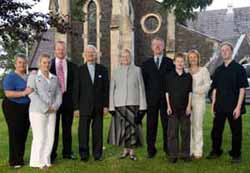 The Rev Canon Dr Ken Cochrane preached his final sermon as the Senior Minister of Christ Church Parish at a service of Evening Prayer on Sunday September 30.

The Rector, the Rev Paul Dundas, led the service and in welcoming Canon Cochrane’s family and friends he spoke of the wonderful contribution that the Canon had made to Christ Church as the Senior Minister since 1999.

The Scripture lessons were read by Canon Cochrane and the Curate Assistant, the Rev Diane Matchett, led the prayers of intercession.  Renee Madden played the organ and the Christ Church Choir led the praise.  The hymns included, ‘We love the place, O God, in which your honour dwells’, ‘Ye servants of God, your Master proclaim’ and ‘Great is thy faithfulness’.

In his final sermon as Senior Minister, Canon Cochrane recalled being brought up in a Christian home where his father read the scriptures every night. He said the more he learned about the Bible, the more he learned about life.  Christianity, he said, was not a question of where you are but what you become.  Asking the question, “what’s the reason for being born?” he spoke of the importance of finding a vocation in life and of the need to glorify God and enjoy Him forever so the beauty of Christ is seen in you.

Canon Cochrane concluded by thanking the congregation for their friendship and for the many cards, letters and good wishes his family had received. 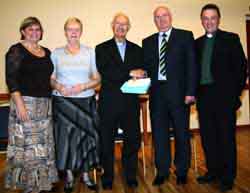 Report and photographs by John Kelly.