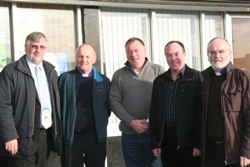 The Bishop of Connor, the Rt Rev Alan Abernethy, stepped into the lives of the people of the Shankill when he was shown round the area by the Shankill Community Council.

The Bishop was accompanied by the Ven Barry Dodds, Archdeacon of Belfast and rector of St Michael’s in the Shankill for 26 years, and the Rev John McClure.

The invitation originated at a meeting the Bishop held with representatives of the local media, among them John McVicar, manager of the Shankill Mirror newspaper, and secretary of the community council. 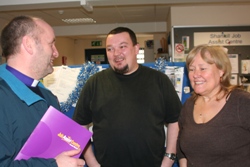 The council was born out of the Save the Shankill campaign in the early 1970s, when huge swathes of housing were being torn down and never replaced, resulting in a dramatic decline in population. It now provides resources and opportunities for those remaining in the area, and aspires to regenerate the Shankill while retaining its tradition.

In a meeting with council members, the Bishop learned that education, social housing and increased employment opportunities were among the greatest needs in the area.

The community council is also involved in the Parades Forum, and community development worker Winston Irvine said the council had secured funding for a cross community interface project which had focused on dialogue, and resulted in many peaceful outcomes to potentially controversial parades.

“The dialogue was not just about the number of bandsmen or how loud they play. It was about education, suicides and developers coming in,” Winston told the Bishop, adding that 200 residents were now qualified as community safety stewards. 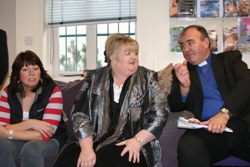 In response to Bishop Abernethy’s enquiry about where the churches should begin to reconnect with the community in the area, members said there had been some enlightened clergy working in the area over the years of the Troubles, and paid particular tribute to Archdeacon Dodds.

The Bishop was thanked for demonstrating a ‘passion for this area.’ He was also presented with cheques totalling £1,400, raised during the Poppy Appeal, which were to be distributed to seven different organisations.

At the Lower Shankill Community Centre, the Bishop met with Jackie McArthur, a pastor and community interface worker, and Brian Watson. He heard a key problem in this area is developers moving in because of the proximity to the city centre.

Jackie said the area was one of the most deprived in Northern Ireland, with high levels of suicide and drug use. It had also been demonised in the Press, he said, and was a community that had been on its knees. “But we believe there is hope for it,” Jackie said.

Brian said government intervention in health, education and employment was needed to tackle the poverty underpinning the area’s problems. “The people here have no dreams. We need to give them dreams and visions,” he told Bishop Abernethy. 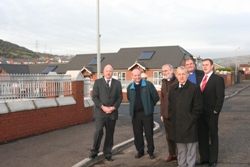 Commenting on the number of churches in the Shankill, the Bishop said he was saddened to see so many padlocked. “I want our churches to become tents again with loose pegs,” said the Bishop. “I can no longer call it a parish church if it is not there for the community.”

The Bishop visited the Job Assist project, which targets not only those people who are out of work, but those who don’t appear on any statistics because they don’t even sign on.

Ronnie Andrews, senior mentor, said the project, which trains people for work and so helps them find jobs, had broken all targets. 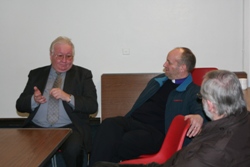 At the Forum for Action on Substance Abuse (FASA) the Bishop met Director Anne Bill and members of staff. He heard the group started in 1995 and first referred people with problems to other agencies, but now has its own professional teams involved in suicide and self harm, intervention, education, training and treatment programmes.

FASA works with 5,000 people a year, and leaflets designed by young people are sold across the UK and have even been copied by organisations in Sweden.

The tour took up Bishop further up the Shankill to Black Mountain Primary School where he met with the principal Mr Billy MacAuley, and Councillor Frank McCoubrey of the Board of Governors.

Mr MacAuley said Black Mountain was a school for the entire community. “We realise now that we don’t work with children, we work with families, we don’t think about the intellectual until we get to the heart.”

He rubbished any suggestion that education in the Shankill was poor, telling the Bishop that four former pupils were this year offered university places.

“It is time for churches and schools to re-establish themselves and take their place in society,” Mr MacAuley said. “Their influence has for too long been diluted by the fear of paramilitarism.” 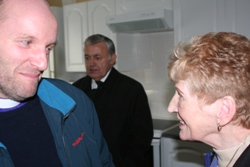 There was little evidence of the bad old days of the Troubles in a nearby development of social housing in Springmartin. Bishop Abernethy was invited to tour one of the eco-friendly bungalows, now home to 72-year-old Ethel Dargan. “I’m like a child with a new toy,” Ethel told the Bishop.

Mr McCoubrey explained that Springmartin had once been home to 500 households. Now only 170 families lived there and many dwellings were bricked up.  “People are trying to preserve this place and keep it from becoming a greenfield site,” the councillor said. “At one stage things were very bleak but now there is light at the end of the tunnel.” There are plans for more social housing nearby.

Speaking at lunch at the Farset International Hotel, the Bishop thanked the Shankill Community Council and all the projects he visited, and pledged his support whenever needed.