Institution in Templepatrick and Donegore 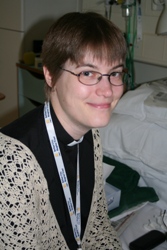 The Rev Jennifer Bell was instituted as vicar of the united parishes of Templepatrick and Donegore on Thursday January 3.

Jennifer, 30, was previously chaplain at Belfast City Hospital since December 2005 and prior to that was assistant chaplain in both the Royal Victoria and City hospitals.

She has a degree in agriculture with animal science from Harper Adams University College, and worked in a nursing home before studying for three years at Theology College.
.
Encouraged to consider chaplaincy, Jennifer took part in a 15 month Clinical Pastoral Education residency at Hartford Hospital in Connecticut, USA, which she described later as “a real baptism of fire.”

In addition to her role as chaplain at the City Hospital, Jennifer was also curate at St Nicholas, Belfast.

She said she is looking forward to her ministry in Templepatrick and Donegore. “Although I use the same skills, parish ministry is very different to hospital ministry and that will be my main challenge,” she said.

“I am really looking forward to getting to know the people of Templepatrick and Donegore and to journeying with them. I am a people person at heart so having the opportunity to get to know a new parish and the people in it is an exciting time for me.”

The Bishop of Connor, the Rt Rev Alan Abernethy, instituted Jennifer as Vicar of Templepatrick and Donegore in a service in St Patrick’s Parish Church, Templepatrick..