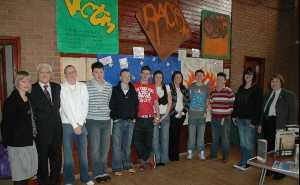 Photos by the Rev Ken Houston.

A visit to former Nazi concentration camps has allowed teenagers from north Belfast to witness at first hand the horrors hatred can unleash.

Their investigations gave rise to a moving exhibition on the holocaust which opened in St Andrew’s Parish Church Hall, Glencairn, on Monday January 14.

The project has been facilitated by Sister Valerie Thom of the Church Army, and involves 12 young people aged from 12-17, who although non-church goers attend weekly meetings in Glencairn hall to talk about life issues from a Christian perspective and take part and other activities. 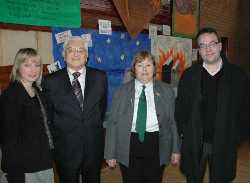 The holocaust project arose out of a visit by three of the group to St James’s Palace last year, where they met Prince Edward. Also there on the day were representatives of the Holocaust Day Trust.

The trio returned to north Belfast anxious to learn more about the holocaust, and as a consequence a 15-strong group travelled to Berlin and Poland in September where among other places they visited Auschwitz-Birkenau and Schlinder’s factory.

One of the instigators of the project, 17-year-old Nathan Peeples, was unable to go on the trip as he was recovering from a bone marrow transplant, but Nathan will have a 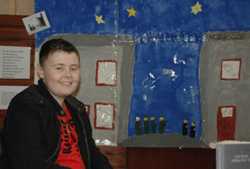 special role to play when he officially opens the exhibition in the presence of a number of high profile guests.

Sister Valerie said this was very much a community project.  It has been assisted by pupils from Harmony Hill Primary School and is a multi-media show, including paintings, DVD and video footage, a graffiti board, a railway track, replica Auschwitz beds, and a model of Anne Frank’s house.

“This is a real community thing with the schoolchildren, teachers, community leaders and parents involved,” said Valerie. 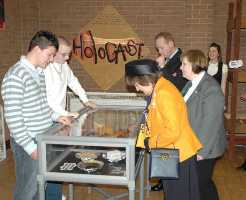 “Learning about the holocaust has helped teach the children about hatred. It teaches them that people are hated without cause and this is what can happen. They realise that things still happen today, even at situations like football matches.”

Valerie went on: “The children have been really touched by the suffering people have gone through, and while it won’t really hit many of them until they are older, this is about laying foundations.

“There is a quote at Auschwitz saying ‘If we don’t learn from history, it will happen again.’”

Nathan opened the exhibition for invited guests and it is

open to the public in St Andrew’s Parish Hall from 2pm-8pm until Friday January 18. 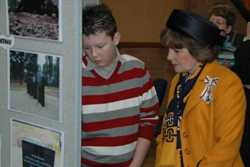 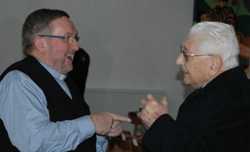