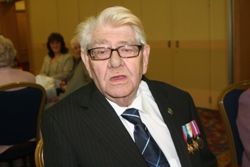 A number of parishioners from the Diocese of Connor, all aged over 70, were in St Patrick’s Cathedral, Armagh, on Thursday March 20 to receive the Royal Maundy from Her Majesty Queen Elizabeth II.

This was the first time for the Office for the Royal Maundy to be held outside England and Wales.

There were a total of 164 recipients – 82 men and 82 women, as the Queen is now in her 82nd year.  All were over 70 years of age and have made a significant contribution to Church or community life.

The four main Church Leaders nominated people from their respective religious traditions from all over Northern Ireland in response to the request that the recipients should be as representative as possible at a service within the context of Anglican worship.

The distribution of alms on Maundy Thursday has its origin in our Lord’s washing the Disciples’ feet.  It is an occasion rich in symbolism and ceremony and one of great importance to the Queen.  She was accompanied by the Duke of Edinburgh and the Choir of the Chapel Royal, who along with St Patrick’s Choir, led the worship 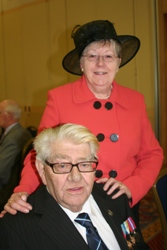 Mr Victor Hotchen , 84, a parishioner at St Cedma’s, Larne, was among those receiving the Royal Maundy. He was accompanied to the service by his daughter Mrs Carole Cowden.

Victor was born in Norfolk in 1923. At 19 he joined the Royal Navy, serving as a Leading Steward. From 1942-1944 he was based in Iceland, and served on HMS Baldur II, patrolling within the Artic Circle. From 1944 Victor was based for 18 months in Larne, serving on the submarine chaser vessel HMS PC74. It was while stationed in Larne that he met and in August 1945 married his wife Margaret in St Cedma's.

At the end of the war, Victor was Leading Steward on HMS Courier, a minesweeper which cleared the Malacca Straights, and the harbours of Singapore and Hong Kong, following the defeat of the Japanese. In 1946, Victor was one of 16 stewards who manned the SS Leinster, which returned more than 400 civilian prisoners, captured by the Japanese, from Hong Kong to Southampton.

Victor’s final commission was on HMS Kent, before she was decommissioned to Scotland. Victor was decorated with the 1939-45 Star and Medal, and with the Atlantic Star.

After the war, Victor spent some years ashore, before returning to the Merchant Navy as cook and steward on the Shamrock Shipping Line ships sailing from Larne. In 1974 he finally settled on land and was head chef at a number of Co Antrim hotels. He retired in 1994 at the age of 71.

Father to Carole and Kenneth, with five grandchildren and four great grandchildren, Victor has been a member of St Cedma's since his marriage to Margaret, who sadly died in 2002. Despite failing eye sight, Victor still remains an active resident of the British Legion run Old Mill residential complex in Larne which is his home.

Speaking after the service Victor said he had very much enjoyed meeting the Queen. “She stopped to speak to me. I told her I was born around where she comes from but that I had been living here since the war ended. She told me to have a nice day,” he said.

His daughter Carole said she was very proud of her father. “He was quite emotional when the Queen came over to him. The service was very moving and he was a wee bit shaky on it,” she said. 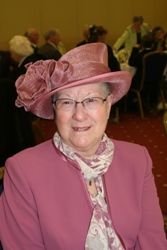 Born in 1936 in one of the thatched cottages of the “Front Street”, for which Glynn was well known, Maisie was the eldest of six children. She soon learned what it was to devote herself to helping others, when after her younger sister (Betty) was born, her mother gave birth to triplets (three boys), before her sixth and final son.

Throughout her childhood Maisie helped her mother care for the triplets. She left the Glynn School at age 14 to work in the Sun Laundry in Larne, which washed the linen not only for the many prestigious hotels of Larne’s hay day as a tourist destination, but also for the ferry companies.

Here Maisie married the driver of the laundry van, Albert Swann. Maisie and Albert celebrated their golden wedding anniversary on December 20 2007. Following her marriage, Maisie left work to bring up her family of two sons and a daughter, living in the heart of Glynn Village. 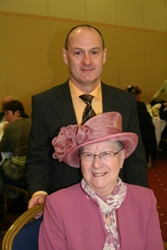 She is known for her involvement in community life, and for the help she has given to everyone, including a lifetime of care and visiting older residents. She has served the village community as a member of the Village Hall committee, the Glynn Drama Group and the village choir, in addition to a life time of service in the Parish Choir, on the Select Vestry of St John’s and for many years as a Sunday School Teacher.  It is a mark of the affection in which Maisie is held that sometimes she is referred to as “the Mayor of Glynn”!

At the age of 69 Maisie was faced with a further challenge when her daughter Margaret gave birth to triplets. Maisie has devoted the past two years to assisting Margaret and her husband Roy with the triplets and their older bother. In addition, she has nursed other family members through ill health.

Maisie said the Queen looked beautiful when she gave her her Maundy purse. “She has a beautiful smile and shakes hands very warmly. It was quite emotional, I was a bit choked up,” she said.

Maisie’s son Derek, who accompanied her to the service, said: “I am very proud of my mum. It was a great honour for her.” 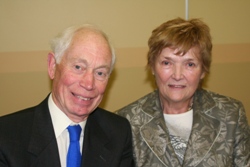 A stockbroker, Hilary served for 30 years on the Representative Church Body as an elected member from the Diocese of Connor, from March 1974 until his retirement from membership in March 2004. He was a member of the RB’s Finance Committee from 1974 until, under the new committee structure established in 1993, he became both one of the original members of the RB Investment Committee and also the first person to chair the RB’s Executive Committee.

Hilary was also an RB-nominated member of the Church of Ireland Pensions Board from 1989 until 2004.

The Ven Dr Stephen McBride, Archdeacon of Connor, said: “He is a man blessed with exceptional wisdom which has been especially helpful in the formation and running of the clergy pension scheme.”

Mr Morrison said after the service: “It was a great honour to be here. I was very surprised to be nominated.” 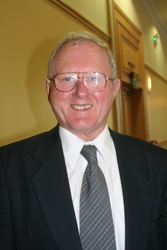 Two parishioners of St Michael’s in Belfast were among the recipients at the service. Stanley Philpott, a lifelong member the parish, has been involved with scouting for more than 50 years.

Stanley kept scouting alive in the Shankill Road all through the Troubles, meeting in different halls in the area. Although he had no sons, Stanley’s three daughters all ended up joining the scouts. Stanley was accompanied to the Cathedral by his wife Betty, a former President of Connor MU.

When the Queen stopped to present the Maundy to Stanley, her eye was drawn to the badge he wore which marked his 50 years in scouting. “She saw the 50 year medal and asked me what it was about. I told her I was hoping to retire but then the made me President for another four years!” Stanley said.

Betty, who has met the Queen on a previous occasion at an MU event, said: “She was lovely, very gracious.”

Maud Batchelor, 79, is another stalwart of St Michael’s who has devoted herself to young people of the Shankill before, during and after the Troubles. The 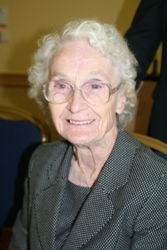 Ven Barry Dodds, Archdeacon of Belfast and rector of St Michael’s, said: “She had one son herself but would have arrived at the meeting of any organisation with a hoard of children by her side. She always worked hard for the parish.”

Maud only retired from the Vestry at St Michael’s last year, and is still involved in Christian Endeavour. She had a front row seat in the Cathedral, and was the 10th person to receive the Royal Maundy. “The Queen was lovely. I thanked her for the money and she gave me a smile. That was enough,” said Maud, who was accompanied to the service by son Thomas.

Clough pensioner John Swan, 75, also received the Royal Maundy, having been nominated by his long-time friend and former rector, the Very Rev Patrick Rooke, who now serves as Dean of Armagh.

John has given s decades of service to St. James’ Church of Ireland in Dunaghy (Clough) in a variety of capacities.

For many years he has been the Sexton with responsibility for everything from cutting the grass to the restoration of stain-glass windows and even the overseeing to extensive repairs to the church building.

In addition, John is also the Rector’s and People’s Churchwarden.  Every Sunday, he prepares the Church building for worship and welcomes his fellow parishioners to services.

The former engineer is also the congregation’s Verger and enjoys helping the Bishop whenever he visits. 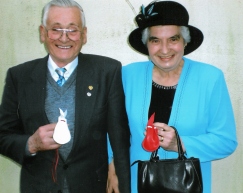 Looking back on the day in Armagh, John said: “I enjoyed it very much, but not as much as my wife, Isobel did!

“We all filtered into the cathedral in four rows like clockwork.  As we sat there, the excitement grew and grew until the Queen came down. When she presented me with the red and white purses and shook my hand it sent a tingle up my spine.”

Security was tight for the Royal visit. Following the morning service in St Patrick’s, the 164 recipients and their companions enjoyed a lunch in Armagh City Hotel.