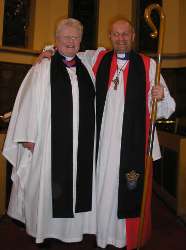 The Rev Elizabeth Hanna was instituted as rector of the Parish of St Nicholas in Belfast on Thursday April 3.

A former schoolteacher, Liz, 58, grew up in Kilkeel on the Co Down coast. She attended Kilkeel High School as a student and later returned there in a teaching capacity for 20 years.

Liz studied geography at Queen’s University, Belfast, before starting her teaching career at Lurgan Technical College. Three years later she went to the London School of Theology where she studied for a degree.

Taking up a post at Kilkeel High School, she taught geography and RE, but eventually this became pure RE. Liz also attended a midweek Bible Study in Kilkeel, where she was asked a question.

“The question was, if you could do anything and didn’t have any constraints, what would you do?” she said. “I wrote ministry in my book. It was a big shock to me to see it. I did not say anything but when I read my Bible and went to church it seemed to be being confirmed.”

Two weeks later her rector suggested she think about the ministry – something she had been doing for an entire fortnight!

Within a year Liz was in Dublin training, and during her two year course she studied with the Jesuits in the Milltown Institute where she did a Masters in Spirituality.

She was also a student reader in Ballybrack, Killiney. On completion of her training Liz was ordained curate at Bangor Abbey, Diocese of Down, in 2001. After three years as curate Liz was instituted rector of Magherally and Annaclone, Diocese of Down and Dromore, where she has been incumbent for the last three and a half years.

She said was looking forward to moving to St Nicholas. “I am very excited about what lies ahead,” she said. “I see the parish within the parish boundary as an area of almost virgin territory, where the population has changed almost entirely.

“Most of the parishioners, I believe, no longer live within the parish boundary. Instead the houses are occupied by a lot of first time buyers and students. The whole area is almost unreached with the Christian message, people who do not know what the church can do for and with them.”

Liz added: “I am looking forward to working with parishioners who already have a vision of their own ministry, and know that it’s no longer the rector who does everything. It is very much a church where people with gifts are being used and I would certainly want to encourage the continued use of those gifts.”