St Colman’s looks to the future as it celebrates centenary 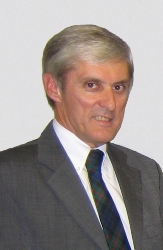 St Colman’s Parish Church, Dunmurry, celebrates its centenary this month with a weekend of special events preceding the institution of a new rector.

A centenary dinner takes place in the Beechlawn Hotel on the evening of Friday, April 25. Special guests are the Rt Rev Alan Abernethy, Bishop of Connor; the Very Rev Dr Houston McKelvey, Dean of Belfast who served his first curacy in St Colman’s; and former rectors Canon Terry Rodgers and the Rev Mike McCann.

Speaker at the dinner is Mr John Williams, parish reader and chairperson of the Centenary Committee.

The committee has also organised an exhibition to mark 100 years of this beautiful church, and this will run from 10am-4pm on Friday 25, Saturday 26 and Sunday 27 in the parochial hall, with an official opening by the Bishop of Connor at 10am on Saturday.

The exhibition features photographs, letters and other memorabilia chronicling life in the parish over the last century.

Bishop Abernethy will celebrate a service of Holy Communion in St Colman’s at 9.30am on Sunday and the special Centenary Service will take place at 11.30am. The preacher is the former Archbishop of Armagh and Primate of Ireland, Lord Robin Eames. Among the guests will be Lisburn Mayor, Councillor James Tinsley. Light refreshments will be provided after the service. 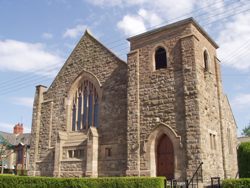 A Centenary Booklet has been published, and this includes a foreword by Mr Williams, and a history of the church by Canon Terry Rodgers, based on an original article by former rector the Rev Cannon RC Ellis.

For those interested in statistics, Dr Bob Common delves into the records and makes some interesting observations on births, deaths, marriages and more.

The people of the hamlet of Dunmurry first worshipped in a building known as the Assembly Rooms, constructed in 1874 and in use today as the Parochial Hall.

But they wanted a Church of Ireland in the village. They secured a site on the main Belfast-Lisburn road, but as this may have affected the congregation of Upper Falls, they instead bought the current site which belonged to the Northern Bank.

The Bishop of the Diocese gave his consent, and building began. The consecration, by the Rt Rev John Baptist Crozier, Lord Bishop of Down, Connor and Dromore, took place on St Mark’s Day, April 25 1908. 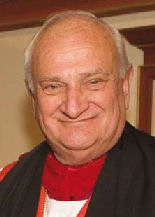 The parish continued to be linked to Drumbeg Parish until 1932. Canon Ellis was appointed curate-in-charge and was made rector in 1945. Following his retirement he was succeeded by Canon Terry Rodgers, the Rev Mike McCann, and the Rev Tom Priestly.

In recent years there have been several changes within the community in Dunmurry. A movement of parishioners out of the village has led to a reduction in the numbers of young people, and the closure of the Girls’ Friendly Society and Church Lads’ Brigade.

Although the congregation is also smaller, the choir, Mothers’ Union, Sunday School and Bowling Club still flourish as do the new Luncheon Group and Working Group.

As there are always maintenance issues, a Centenary Fund was launched this year with the aim of raising £26,000 for renovations.

The incumbency of St Colman’s has been vacant since the death of Rev Priestly in August last year. On May 1, the Rev Denise Acheson, curate assistant at Ballyholme Parish, Bangor, will be instituted as rector.

The mother-of-three said she was very much looking forward to moving to Dunmurry. “I am excited but I am also terrified,” she admitted.

“I pray that God, through all my experiences with Alan (Bishop of Connor and former rector of Ballyholme) and on my own in the parish for the past months will prepare me more for moving on to the next stage.”

Looking forward to the weekend events, Mr Williams said he hoped the centenary celebrations would continue throughout the year. “I can remember the 75th anniversary of the church and never in my wildest dreams did I think I would be playing such an important role in the 100th anniversary celebrations,” he said.

“This anniversary is a new beginning in many aspects. The church is 100-years-old. When you talk about a church you are not just talking about a building, but the people who worship and work in it. We are very much looking forward to the arrival of the new rector.”