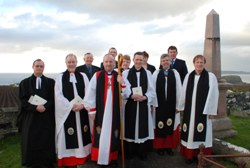 The Rev Patrick Michael Barton, former curate of St Mark’s, Armagh, was instituted as rector of Ballintoy, Dunseverick and Rathlin at a service in Ballintoy Parish Church on Thursday April 24.

Speaking at the service the Rt Rev Alan Abernethy, Bishop of Connor, said:  “Patrick is coming to the most beautiful part of the Connor Diocese. I know he will undertake his duties to the very best of his ability but he will need your support and prayers.”

The new rector’s wife Deborah and their three children Adam, Kate and John, along with family, clergy and parishioners from near and far travelled to offer their support at the institution.

Patrick’s former rector the Rev Canon John McKegney gave a challenging yet inspiring sermon.  He spoke of Patrick’s incumbency as a marriage because of the need for give and take, support, encouragement and tolerance.

He said: “You are privileged to have Patrick and his family coming to live in this beautiful part of the world.  They will love you, but you must love them, too.

“You – his new Parish family – must love and care for him.  Let him see that there is a lot of love around.  Pray and care for him, give him words of encouragement, treat him as though he were a member of your family.”

Patrick was presented with gifts comprising of a Bible, towel, Prayer book, oil, water, and bread which symbolise the rector’s teaching, pastoral and sacramental ministry. Afterwards clergy and friends made their way to Dunseverick primary school for supper. 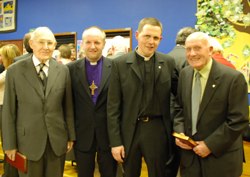 Warm wishes were extended to the rector by Rural Dean Canon George Graham, Mr Mark Heaney on behalf of Ballintoy, and Mr James Ramage on behalf of Dunseverick.  Local Presbyterian minister the Rev Wilson also extended a warm welcome on behalf of the local churches.

Patrick thanked those who had been supportive during his time in Armagh and spoke of his ministerial hopes as Ballintoy and Dunseverick’s new incumbent.

“I’m extremely happy to be here and very grateful to be the new minister of these Parishes and I look forward to working with and getting to know each of you,” he said.