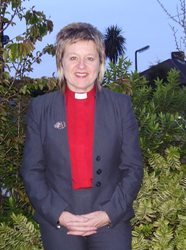 The Rev Denise Acheson, former curate assistant in Ballyholme Parish, Diocese of Down, was instituted as rector of St Colman’s Parish, Dunmurry, on Thursday May 1.

Denise was born in Manchester but spent most of her life in the village of Churchill, Fermanagh where she worshipped at Inishmacsaint Parish Church.

Following her marriage to William she moved to Australia where her first two children, Ruth and Dean, were born. The family lived there for seven years before returning to Northern Ireland where their third child Robert was born.

Denise worked as a lab technician at Collegiate Grammar School in Enniskillen for 13 years, despite a strong sense of vocation.

“Ever since I was a teenager I felt a calling to the church, but my life took different roads. When I was in my thirties I was doing a lot of things within the church and working for a living got in the way,” she said. “Eventually I just had to apply and was accepted.”

William died in 1994, when youngest son Robert was still very small. Denise admits bringing up the family on her own was trying. “I would never choose to be a single parent, but God is faithful and you get there through pushing, struggling, help and all sorts. It was not easy.”

Robert continues to live with his mother, Dean has returned to Australia and Ruth lives in England. Denise has one grandchild.

After her ordination in June 2005, Denise went to Ballyholme as curate assistant to the Rt Rev Alan Abernethy, who is now Bishop in Denise’s new diocese of Connor.

“Alan started me off. He trusted me in many things which was a great affirmation and certainly he let me have great experiences. He shared his ministry with me,” Denise said.

She said she is looking forward to the move to St Colman’s. “I am excited and terrified. Dunmurry is going to be very different to Ballyholme, but I knew nothing about Ballyholme when I started there and it turned out to be a wonderful place and I am hoping it is going to be the same in Dunmurry.

“I pray that God has used all of the experiences with Alan and during the months on my own in Ballyholme to prepare me for the next stage of moving on.”