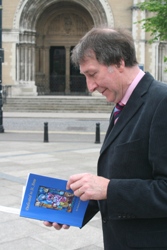 A Lisburn man has published a book which delves into the history and architecture of all 29 churches and chapels within the Church of Ireland which are dedicated to St Anne.

Mr Scarlett, aged 72, is a parishioner of St George’s, Belfast, but it was during the time he worshipped at St Anne’s Cathedral in the city that he was inspired to work on this project.

“I had hoped the book would mark the centenary of the consecration of the nave in St Anne’s in 2004, but I was involved in an accident which delayed the project,” he explained.

The former principal of Graymount Girls’ School in North Belfast has long had an interest in church and local history and the railways, where his late father worked. He has had articles published in historical magazines, but this is his first book.

He believes that Church of Ireland churches are an important part of the built heritage of Ireland, but says recording the architectural history of that heritage has not been a high priority of the church.

“There is a noticeable dearth of architectural studies, particularly of the little known churches in more remote area,” he writes on the cover of the book.

“It is hoped this book… will encourage a greater interest in the architecture of all churches and not just those famous and well documented buildings situated in the cities and large towns.”

His research took him the length and breadth of Ireland, visiting all the sites, as well as the RCB Library, the library in Church of Ireland House, Belfast, and the National Library in Dublin.

“I enjoyed researching the book immensely,” said Mr Scarlett. “It was interesting to meet many people who were so welcoming and helpful and inspiring to see so many churches which were clearly cherished.

“Unfortunately there were other churches, now closed, demolished or in ruins, which have been allowed to fall into virtual oblivion with little written or photographic record.”

In some parishes Mr Scarlett was unable to find any records, and had to piece together a history from reference books and newspaper cuttings.

The front cover of ‘Dedicated to St Anne’ is illustrated with a copy of a cartoon of St Anne, by Evie Hone, the famous Irish stained glass artist. The window was not commissioned and the cartoon, which was presented to St Anne’s, Dawson Street, Dublin, is now in the vestry of the church.

The book is illustrated with photos of all the churches, taken by Mr Scarlett. He received a grant from the Church of Ireland towards the publication of the book.

During his research, he unearthed some interesting facts:

• St Anne is a totally fictitious saint constructed by the early church to fill a perceived gap in the Biblical narrative.

• One of the 10 bells in St Anne’s, Enniskillen, was made from cannon captured from King James’ army at the Battle of the Boyne, and which was initially made into two bells, named William and Mary, for the church.

• There is some evidence to support the belief that John Kelly, ‘The Boy from Killanne’, worshipped at St Anne’s, Killanne, Co Wexford.

Mr Scarlett, who is married to Sheila and has two sons, Gavin and Keith, is currently gathering information for books about Church of Ireland buildings dedicated to St George and to St Thomas.

A bellringer, he is tower captain at St Thomas’, Belfast, and Ringing Master of the Irish Association of Change Ringers. His other hobbies include birdwatching and genealogy.