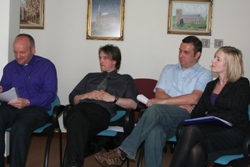 Representatives of agencies and charities working with the homeless debated the issue at a meeting called by the Bishop of Connor on Monday June 9.

Bishop Alan Abernethy said he genuinely wanted to make a difference. “In the north and west of Belfast I see the church has become disconnected from local communities. How do we as a church re-engage with these communities where trust is broken and people feel the church has let them down?” he asked.

The meeting was attended by representatives of the Council for the Homeless, Extern Homeless Support, the Simon Community, Belfast HSST, the Salvation Army, the Housing Executive, Shelter and SHAC Housing Association.

Ricky Rowledge from the Council for the Homeless gave an overview of the current situation, revealing that an average of 20,000 households present to the Housing Executive as homeless every year. 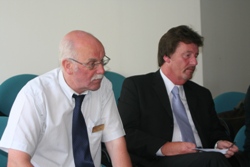 Half of these are ‘full duty’ homeless, Ricky said, detailing the ‘hurdles’ anyone presenting themselves as homeless has to overcome before the Executive has a full duty towards them.

“The main reason people become homeless in Northern Ireland is due to breakdown of relationships and a growing category is the result of the breakdown of private rented accommodation, usually because it is no longer affordable,” Ricky said.

“If you become homeless, that brings a lot of problems. There is the stigma. In rural areas there are a lot of homeless people sleeping rough. They will not go to anyone for help because they feel it is their fault.”

While there is a peripatetic nursing service for the homeless in Belfast, no such service exists outside the city. Ricky stressed that a GP is the gateway to services for a homeless person. 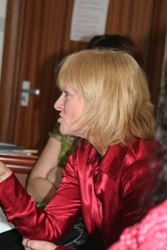 Other problems include difficulty finding or keeping employment, depression, alcohol and drug abuse. The problems often continue once a person is re-housed, primarily due to loneliness, with the new tenant isolated, out of work and on a low income.

Ricky said it was anticipated more people would present as homeless as a result of the current housing crisis. “There is not enough social housing and we have a small though growing private rented sector, but rents are going up and Housing Benefit is not. As a result there are a lot of young people who are going to have difficulties,” she said.

Harry Liddy of the Housing Executive Homeless Policy Unit explained that the Executive’s housing stock had dramatically reduced due to the cessation of new building in the mid 90s and the right to buy policy.

Ray Cashell, Chief Executive of SHAC, said many housing associations had come from church backgrounds. “We need to find ways of reconnecting with the churches and also of linking to voluntary bodies,” he said.

It was highlighted that alcohol abuse is often associated with homelessness, and it is difficult for a homeless person with an alcohol problem to hold down a job.

Ricky explained that the focus now was on moving a homeless person into private rented or housing association accommodation where they may get just two to five hours support a week. “These are people who have been used to 24 hour care,” she said. 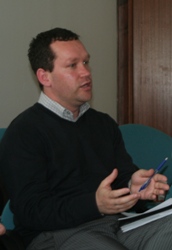 Malcolm Byrne of Extern said so-called ‘floating support’ does not work. “We would see 800 people a year, often in crisis. What is needed is permanent accommodation in a group setting, especially for chronic alcoholics,” he said.

“Eighty per cent of people I work with have alcohol problems and many also have mental health problems. Alcohol is also a major contributor to family breakdown.

Mr Cashell pointed out that alcohol recovery projects were being closed down with clients sent instead to homeless hostels.

Mandy Jones of the Simon Community said that aftercare offered to people once they are found tenancies is only around two hours a week and is normally very formal and provided only during the day. “We are talking about people who have lived in care, in hospital or in prison and have had an intransient lifestyle. It is very difficult for them to live on their own,” she said.

The group suggested the church could help by:

• Addressing the practicalities of alcohol abuse 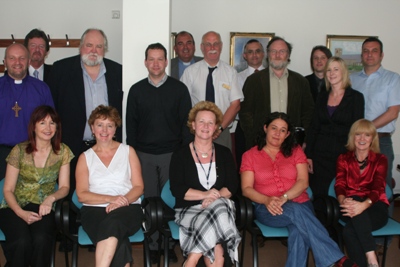 Speaking afterwards, Bishop Alan said the meeting was part of his efforts to examine the issues in society that the church is called to serve.  “We are in a post conflict era and are now dealing with very difficult social issues. I want to know how the church can be involved,” he said.

“Meetings like this help ensure we work together and are able to go to the Assembly and other groups on behalf of people who cannot speak for themselves.

“I was very encouraged by the warmth of people towards church involvement in these issues. They do see the church as having a very important role in working with other groups.”