50th anniversary of the ordination of Canon Ken Cochrane 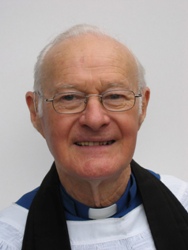 A special service of Holy Communion in Christ Church, Lisburn, on Sunday June 29 will mark the 50th anniversary of the ordination of the Rev Canon Dr Ken Cochrane.

The Rev Paul Dundas, rector of Christ Church, and the Rev Jim Carson, rector of St Paul’s, will conduct the service and the preacher will be the Dean of Connor, The Very Rev John Bond, who was Canon Cochrane’s first Curate at St Paul’s.

Mr Dundas states: “The 29th of June holds special affection for many clergy in the Church of Ireland as it is St Peter’s Day and most clergy who are ordained over 25 years ago were ordained on Saint’s Days such as St Peter’s.

“For Canon Ken Cochrane, this St Peter’s Day is extra special as he will celebrate 50 years as a clergyman in the Church of Ireland and all of those years were served in the Diocese of Connor.”

Canon Cochrane was ordained in St Anne’s Cathedral in 1958 by Bishop RCH Elliott for a curacy in St Aidan’s, Belfast.

The Parishes of Christ Church and St. Paul’s give a warm welcome to all parishioners to attend this special anniversary in the life of Canon Cochrane.  The service begins at 6.30pm and will be followed by a reception in the church hall.