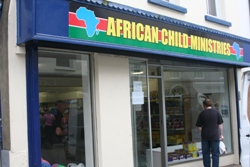 Greenisland Parish Church has opened a new shop in the centre of Carrickfergus which will make a difference to young lives in Africa.

African Child Ministries is situated in the bustling West Street, and sells food items to the public at reduced prices.

All profits from the business will go directly to the Masai area of Kenya, a place very close to the heart of Tony Jones, one of the men behind the venture.

Four years ago Tony, a parishioner in Greenisland, travelled to Kenya to take part in the Walk of a Thousand Men.

“I was touched by the lives of the people there, especially the children,” said Tony. “They had nothing, nothing. When I came home I struggled just going into the supermarket and seeing the choice that we have.”

Tony mentioned it to fellow members of the Greenisland Evangelist Association, one of whom had contacts in the wholesale trade. As a consequence the men set up a stall selling fruit, vegetables and non perishable items in Greenisland Parish car park. 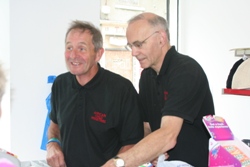 That was three years ago. Now the success of the enterprise means Afrrican Child Ministries can branch out into bigger, full time premises.

“One of the marvellous things that has come out of this is the relationship with the local people who have come to support us – the Working Men’s Club come over and make us tea every Saturday morning, “ Tony said.

Money raised through the stall is sent to Narok, where it is used to help the homeless, deal with problems associated with drought, and operate a feeding programme.

The money has also helped extend a nursery school, adding a kitchen, installing a tank for rain water collection, and adopting 50 children.  The project also employs a minister in Norok to help look after the children, and ensure the school has food, clothes, books and any medical needs.

“One of the main problems in Kenya is something we take totally and utterly for granted – water,” said Tony. “I saw people drinking from the river and the water was brown. Borehole water is not classed as fit for humans but they have to drink it anyhow. Our charity has taken out 6,000 litre tanks and put them into schools to collect rainwater.”

The charity has provided the local Masai minister with a motorbike. “It allows him to go and teach in local schools. It is important that the children know that this is the love of Jesus reaching out to them,” said Tony.

The charity’s stall has also highlighted another need – here in Northern Ireland. “Through the stall we have realised that this outreach is also important at home. People come to the stall and share with us and even ask us to pray for them,” Tony said.

He added that the charity owed much to the people of Greenisland who have supported the stall, the parish for the use of the car park and the many suppliers who have recognised the importance of their outreach in Kenya.

Despite the opening of the shop in nearby Carrickfergus the stall will continue to open in Greenisland Parish carpark from 9am-1pm every Saturday.