Retreat a time of renewal 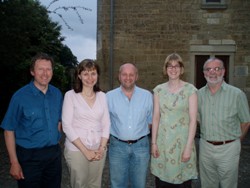 A group of nearly 40, including 35 members of Connor’s clergy travelled to the Ammerdown Centre between Bristol and Bath for a three day retreat.

They were accompanied by the Bishop of Connor, the Rt Rev Alan Abernethy, Sister Valerie Thom of the Church Army, and Peter Hamill, Connor Training Co-ordinator.

The Rev Helen Houston, Chaplain of St Rocco’s Hospice, Warrington, a former curate with Bishop Alan when he was rector of Ballyholme, also joined the retreat, and led the devotional talks.

The retreat was designed to give the participants time and space for spiritual and personal reflection.

As well as free time and time for worship, the group travelled to Wells where they visited the 12th century mediaeval cathedral.

Bishop Alan later said the retreat had been “a time of refreshment, listening and renewal for all.”