Home parish a strength for soldier in Afghanistan 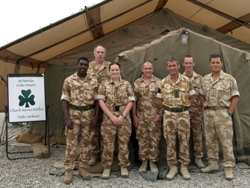 Richard Sherridan, a member of 1 Royal Irish currently serving in Afghanistan, has spoken of the strength he gets from All Saints Parish Church in Antrim.

WO2 Richard, married to Lisa, dad to Penny, and son-in-law to former All Saints organist Madeline McMenemy, left for a six month deployment to Afghanistan two months ago.

Since then there have been several fatalities in the region, including the death of the first woman soldier to die there.

On the Sunday before Richard left for Afghanistan, he distributed prayer cards for every member of the congregation at All Saints.  The card was designed by Padre Albert Jackson who originates from Co Londonderry and he asks us to pray for 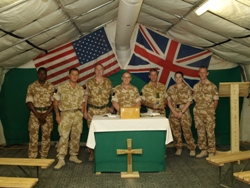 The card concludes with A Soldier’s Prayer: ‘Help me O Lord, never to be so afraid as to neglect my duty; to be diligent and honorable in all things; and to show fortitude, cheerfulness and courage in the face of hardships and danger.  Be with all whom I love; Guide them, protect them, and give them peace in their hearts; through Jesus Christ our Lord.  Amen.’

It was particularly relevant that Richard gave out the cards at a service of Holy Baptism when the children are signed with the sign of the cross becoming Christ’s soldiers and servants until their life ends.  In a letter to the Ven Dr Stephen McBride, vicar of Antrim, before he left, Richard wrote: ‘When Amazing Grace was sung I had a lump in my throat and a tear in my eye.  It was a first class service in preparation for me deploying out to Afghanistan, arming me hopefully with the necessary strength to tackle the challenges the next six months will throw my way.”

He continued: “Whenever I am overseas, I really appreciate what I have at home and also what I have found in All Saints’ church.  I often think about the Sunday mornings there. 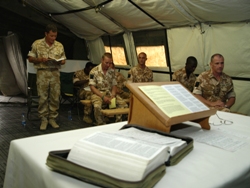 “I have found All Saints to be a place where I belong and when I walk out after the service I feel set up for the remainder of the week.  I have a real glow about me.  It is a place that is user friendly, welcoming and somewhere I look forward to going to when I am home.  It will always be a special place for me and I look forward to many more happy memories being formed there in the future.  In essence, All Saints is a fantastic church with great people and when you are away from it, you realise its worth.”

Richard stated: “The 1 R Irish Battle Group has a very busy summer coming its way, there is no doubt it will be a roller coaster ride.  As the Commanding Officer put it: ‘At the end of these six months there will be grey hair, receding hair, tears, anger, sadness and a whole mixture of emotion.’ For me it is comforting to know where to look for strength when it starts getting tough and I thank you for guiding me there.”

Over the past few weeks, there has been a hightened sense of tension in Afghanistan with several fatalities and injuries.  In an e-mail, Richard wrote, “Life here continues at speed, we had a Company Commander injured in a mine strike up country a week ago.  Thankfully he is ok and back in UK recovering, he may lose a finger but he is one very lucky guy that it wasn't more serious.”

Richard said Padre Albert was doing a fantastic job at St Patrick’s in the Desert. “He is a real character and the guys really enjoy him being around.  Church services continue and the size of the congregation is usely determined on the presence of the Commanding Officer!!  The Padre is starting Bible Study classes, the first one being this evening so I'll get along to that – tonight’s topic – obedience.”

Richard continued: “When all is said and done, the soldiers in the Battalion are doing their country proud and their spirits remain high.  There is an awful lot of growing up going on.  Thanks for your emails and keeping us all in your prayers.’

Please continue to pray for Richard, Lisa and their daughter Penny, those who are deployed with 1 Royal Irish, and all the other men and women serving throughout the world.