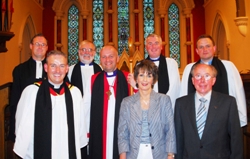 The Rev Gary Millar was instituted as rector of the united parishes of St Paul and St Barnabas, Belfast, on Thursday, June 26.

A native of Coleraine, Gary worked in computing before his ordination in Llandaff Cathedral, Wales in 1991. He was a curate in two parishes in the Diocese of Llandaff over a period of six years, before he was appointed Rector of Dromara and Garvaghy, Diocese of Down and Dromore, in 1997.

Gary moved to the incumbency of Kilkeel in 2001. He is married to Gillian and the couple has four children aged 15, 14 and eight-year-old twins.

“We are very much looking forward to the move to St Paul and St Barnabas,” Gary said. “It is a very different parish to Kilkeel as we will be moving from a small community to an inner city parish with different challenges.”