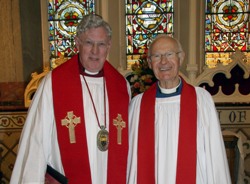 A special service of Holy Communion in Christ Church, Lisburn, on Sunday June 29 marked the 50th anniversary of the Ordination of the Rev Canon Dr Ken Cochrane.

The Rev Paul Dundas , rector of Christ Church, and the Rev Jim Carson, rector of St Paul’s, Lisburn, devised the liturgy based on Holy Communion and Mr Cochrane celebrated at the service of Holy Communion.

The preacher was the Dean of Connor, The Very Rev John Bond, who was Mr Cochrane’s first curate in St  Paul’s. He took as his text “we do not preach ourselves but Jesus Christ as Lord” [2 Cor 4:5].  Mrs Norma Vokes and Mr Alan Walker led prayers of thanksgiving and during the service a collection was taken for the Christ Church Roof Fund and St Paul’s Kenya Project in 2009. 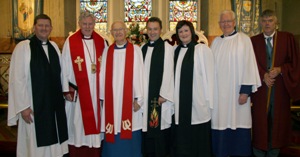 Richard Yarr presided on the organ and together with the combined choirs of Christ Church and St Paul’s sang the anthem, ‘The Lord’s Prayer’.  The congregational hymns included, ‘O praise ye the Lord’ and ‘We have a Gospel to proclaim.’

The service was followed by a reception in the church hall where gifts were presented to Mr and Mrs Cochrane by both parishes as well as former curates of Mr Cochrane.