Putting young people back on track in Greenisland 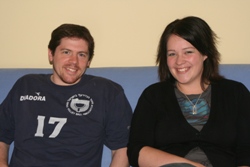 Greenisland Railway Station, once a magnet for anti-social behaviour, is now home to a project aiming to put young people back on the right track.

The Realway Drop-In Centre is an initiative of Greenisland Parish Church as part of GRASP – the Greenisland Railway Adopt a Station Project.

Every Wednesday and Saturday night, youth workers Rachel Kirker and Alan Wright, best known as Arf, welcome young people into a Portacabin beside the ticket office.

The Rev Paul Lyons, rector of Greenisland, said: “We chose to locate the project at the station because that’s where young people have gathered for drinking, drugs and other anti-social behaviour.”

The project has received funding totalling £94,000 from Children in Need.

Arf said the behaviour of young people in the past made life difficult for people living near the station. “The neighbours had a terrible time. Some even put their houses up for sale because they were fed up with it. They had their windows broken and their cars scratched. One of them had his dog set on fire,” he said.

“The problems mostly arise from drinking, and the young people congregate at the station because there is nothing open for them that late. They just want to hang out.” 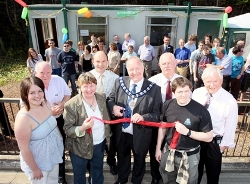 Greencastle Railway Station attracts up to 30 young people on a Saturday night. Some of them will have drink with them, and many will call into the Portacabin.

Rachel said: “They are quite responsive to us being there. They are not allowed to drink in the Portacabin but they come in because we have a Wii, laptops and food for them. It is somewhere they can come, listen to music and have a chat.”

Arf and Rachel also organise projects to get the young people more involved, including paint-balling, sky diving and DJ school.

The drop-in centre has the support of Northern Ireland Railways and the PSNI. The presence of the Portacabin and those inside has reduced vandalism at the station.

Arf said: “The police come down regularly to see what’s going on. We are going to work with them on some of the projects they run and they are going to take some of the boys away on activities like hill climbing.”

The project has also got the thumbs up from the station neighbours. “One of the neighbours was having such a bad time he was going to move, but said he feels we have really calmed things down. He hasn’t had a window broken since we started,” said Arf.

The Realway Drop-In Centre was launched with an open day and barbecue, attended by the local Mayor, councillors and representatives of Translink and Children in Need.

Future plans include expanding the project’s facilities, and Arf hopes they may one day have a kitchen in an old bus or train carriage.

Four of the young people who attend the centre are travelling with Greenisland parish on a mission trip to India later this summer.

“It has been a big change for many of the teenagers,” said Paul. “We see a lot of family breakdown and children with very little parental guidance. Many of the kids who come to the station are wondering what they can do with their life, how they can get a job.

“An initial stage of the project is getting to know the kids, getting them to think about work and sharing the good news about Christ. We are already seeing some of the kids coming to Church or to Youth Church, and 10 of them took part in Summer Madness.”

Arf added: “It is not difficult to persuade them. They will take any opportunity to do something different. On a Saturday night they want to sit and drink, but they soon get bored with that.”

The Greenisland project was the idea of Greenisland parishioners Sam and Isy Steel who had a vision to bring God’s word to young people.