Menu
Home > News > An overview of the Lambeth Conference

An overview of the Lambeth Conference 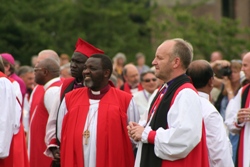 At his first Lambeth Conference the Bishop of Connor, the Rt Rev Alan Abernethy, has been appointed a Listener.

It means he will play an integral role in the drafting of the 2008 Lambeth Conference Report.

It is a demanding role for the 51-year-old, who was consecrated Bishop of Connor just a year ago. And with the Anglican Communion meeting only once a decade, it could also prove an historic role.

A shadow of controversy hangs over this gathering of the Anglican Communion.  The Communion is divided over the issue of sexuality, and the world’s media is doing nothing to shift the focus from the divide or the issue itself.

However, no shadow hangs over the sprawling hilltop campus of Kent University in Canterbury, where the sun has shone daily on the 650 Bishops who have journeyed from all over the world to discuss and pray together on issues of importance. 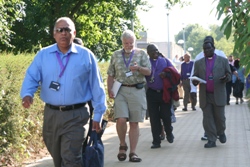 The Bishops are divided into 16 Indaba groups, with approximately 40 Bishops per group. Each day the groups get together to discussed a set topic. Subjects include: Anglican identity; evangelism; social justice; other Churches; the environment; a multi-faith world; equal in God’s sight (when power is abused); the Bible in mission.

The issue of sexuality will be discussed as the conference draws to a close with the topics of the Bishop and human sexuality and the Windsor process programmed for the final three full days of the conference.

It is a busy three week programme. Morning Prayer at 6.30am is followed by Morning Worship at 7.15am in the Big Top (literally a Big Top). After breakfast the Bishops gather in their Bible Studies groups and after tea break it’s into the Indaba groups. 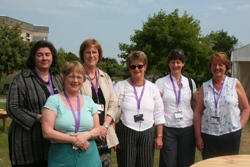 Afternoon activities include provincial meetings, hearings, self-select sessions, Evening Worship. After dinner there are plenary sessions in the big top with high-profile speakers who have included Professor Chris Rapley OBE, Director of the Science Museum and former Director of the British Antarctic Survey; Cardinal Ivan Dias, Prefect of the Congregation for the Evangelization of Peoples at the Vatican and Rabbi Sir Jonathan Sacks, Chief Rabbi of the United Hebrew Congregations of the Commonwealth.

Night prayer is at 9.45pm. The media are banned from Bible Study and Indaba groups and from worship in the Big Top. They are permitted into the plenary sessions.

Ban or not, the moving sound of hundreds of voices raised in songs of praise bursting from the seams of the Big Top cannot be muted. It is one of the few signs that a conference of worldwide proportions is actually taking place on campus. That and the busyness of bishops and spouses, helpers, staff, press and others bustling from one end of this rather confusing campus to the other, all wearing their ID badges with appropriate coloured ribbons (purple for Bishops and their spouses). 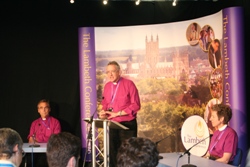 Daily press briefings are held for the ladies and gents of the world’s media. The subject of the conference is normally the item on the agenda for discussion in the Indaba groups that day. However, at a press briefing on the environment, chaired by Bishop Phillip Aspinall, Archbishop of Brisbane, accompanied by the Rt Rev George Browning, Bishop of Canberra and Goulburn and Bishop Katharine Jefferts Schori, head of the Anglican Church in the USA, practically every question related to sexual rather than green issues.

Most delegates are resident on campus for the duration of the conference, although some have opted to stay in the lovely Canterbury itself, full of old world charm with a plethora of restaurants, shops and quaint streets and buildings surrounding the beautiful cathedral, where the Archbishop of Canterbury, the Most Rev Rowan Williams, presided at the Eucharist. 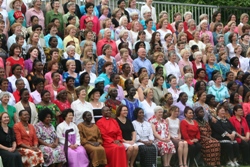 The sermon was presented by the Rt Rev Duleep de Chickera, the Bishop of Colombo (Sri Lanka). The two-hour service was multi-cultural and included dance interpretations of the Gospel by a Melanesian religious group.

Running parallel to the Lambeth Conference is the Spouses Conference where the wives and the (somewhat outnumbered) husbands gather for plenary sessions, Bible study, self select sessions, fringe activities and worship. Bishop Alan was joined for the first part of the conference by his wife Liz, who had the company of several of the spouses of the other 11 Irish Bishops.

An event which received much media coverage was the London Day on July 24, when the capital city was invaded by literally hundred of Bishops and spouses calling on government to keep its promises on aid and development. During the rally the Archbishop of Canterbury handed over a letter to Prime Minister Gordon Brown. Many of the Irish Bishops joined this walk, although the Bishop of Connor was unable to go.

The Bishops were all together on one spot – literally, on July 26 – when they gathered for the official Lambeth Conference photograph. Remarkably all 650 Bishops clambered without drama – amid shouts of ‘Mind your cassocks!’ – on the stand which had earlier held the more colourful gathering of spouses for their official photo.

At risk of offending the Bishops, the spontaneous singing of ‘Oh come all ye Faithful’ was more enthusiastically and tunefully rendered by the spouses than by the rather more bashful Bishops!