Wedding bells ring out on Rathlin 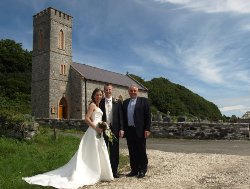 Wedding bells were ringing in St Thomas’s Church, Rathlin, on August 8 – for only the fourth time since the end of the last war.

Siobhán, was born and raised on Rathlin, and her parents Neil and Mary McFaul are both originally from the island. The bride, who has two sisters, Irene and Emma, lived on Rathlin until she was 11, when she left to attend secondary school on the mainland.

Siobhán met René four years ago in Melbourne, Australia, where she was working and he was visiting to watch Formula One racing. After travelling the West Coast together, René returned to Gouda in Holland and Siobhán returned to Northern Ireland four months later.

They frequently visited each other until René moved over in 2005. The couple are now active members of All Saints Parish, Antrim, where René is People’s Churchwarden. The Curate of Antrim, the Rev David Ferguson, conducted the wedding ceremony.

The marriage in St Thomas’ brought together 75 guests on Rathlin, including the groom’s parents, Mr Cees and Mrs Wally Meijer. The service was followed by a lunch on the island and a reception at the Londonderry Arms in Carnlough.

“We are glad that Siobhán has returned to Rathlin for her wedding and wish her and René every happiness for the future.”