Change of climate and culture for Inuit visitors

The Bishop of the Arctic and several of his Inuit parishioners had the chance to experience a very different culture when they visited Northern Ireland this month.

Bishop Andrew Atagotaaluk, four adults and five young people all from Pangnirtung, Baffin Island, Canada, were guests of the Church of Ireland parish of St Nicholas in Carrickfergus.

For St Nicholas curate the Rev Darren McCartney, it was an opportunity to renew old acquaintances. Darren and his wife Karen lived in the Arctic for more than three years, where he was minister in charge of St Luke’s Anglican Church. They returned to Co Antrim in October 2006.

Darren said: “Bishop Andrew and the group from St Luke’s are our good friends. They have come to relax and explore Northern Ireland and find out about our culture.”

The group toured Stormont, visited the Giant’s Causeway and Barry’s Amusements in Portrush and were guests in the Mayor’s Parlour in Carrickfergus. Some also went to Dundrod for the motorbike racing.

“They assisted in a service in St Nicholas’s which was brilliant,” said Darren. “People who had an interest in the work we were doing in the Arctic came from all over the north.” 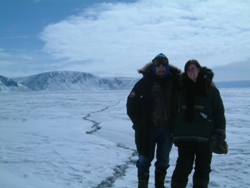 Pangnirtung is accessible only by plane. It can be very isolated and in blizzards can be cut off for a week or more. Temperatures are normally sub zero. Darren has fond memories of his time there. “You stepped out on the late and it went on for miles and you were surrounded by nothing but snow and mountains. The vastness of the place was amazing. It made you feel really small,” he said.

Because of the contrast in climate and lifestyle, his Inuit guests have been amazed by things people here take for granted – grass, trees, roads, brick houses and even cars. Their normal mode of transport is skadoo!

Darren said the guests, who returned home on August 15, had received a warm welcome. “They have appreciated the hospitality they received and have commented on the friendliness of the Northern Ireland people,” he said.