Carrickfergus church is transformed into Narnia! 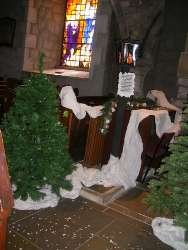 St Nicholas Church, Carrickfergus, formed a fabulous backdrop for an evangelistic showing of CS Lewis’ ‘The Lion, The Witch and The Wardrobe.’

Through the artistic talents of Katherine Rush, a student of the University of Ulster Art College, those who attended the shoeing entered ‘Narnia’ through two enormous wooden doors passing through fur coats to find themselves in a magical forest of Christmas trees complete with snowflakes and the famous lamppost looking unto High King Peter’s throne in St Nicholas’s ‘Cair Paravel’.

Then, just when people thought things could not get any better, they discovered that Carrickfergus Omniplex had supplied the parish with enough popcorn to feed a small army!

Sarah Nelson was among those who attended. She described the event as being “an amazing afternoon!” adding:  “The scenery was beautiful! Film was great and everyone had a brilliant time.” 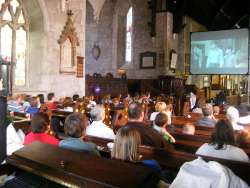 Madison, 2, and Lucas, 4, both agreed that their favourite part of the film was Aslan the Lion. Lucas commented: “There was only one sad thing – the lion died, but then a happy thing happened and the lion was alive again!”

Following the film the Rev Stanley Gamble of Knockbreda Parish explained how those gathered could meet the real Aslan by telling the Parable of the Sower and emphasising the importance of holding onto Jesus’ teaching and following him.

St Nicholas Youth Worker Andrew Campbell, who organised the event, said: “It was great to see so may people turn out and hear the truth about Jesus in relaxed and friendly environment. We hope to see similar events 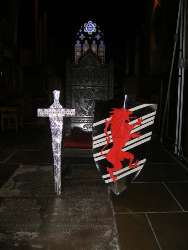 organised in the future.”