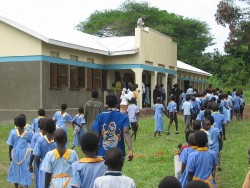 Work is well underway at the new school in Yei, with pupils in Mongo already able to use one of the classroom blocks funded by Connor Diocese.

John Spens, CMSI Mission Partner in Yei, has sent a detailed report on the progress in Mongo to Archdeacon Stephen Forde, chair of Connor Council for Mission, via David Gough of CMS Ireland.

He added: “By August 31, £49,500 from a wide range of Connor parishes and individuals had been sent to Mongo, in addition to the £20,000 already raised by Agherton Parish.

John Spens’ report states that in February this year, thanks to Connor Diocese, the foundation stone was laid to mark the start of the building programme in the Mongo Archdeaconry.

Mongo village is about 16 miles north west of Yei the road is often impassable.  As most of the building materials would need to be transported from Yei or beyond, careful planning was needed to ensure that the builder could continue working without interruption due to the rains.

Bricks, hardcore and sand were provided by the local community and all the builder needed was a lorry to collect these materials to transport them to the site.  Other materials such as cement (around 500 bags), timber, iron sheets for the roof, and prefabricated metal windows and doors had to be transported to the site and stored there until needed.

The report states: “The layout of the new school is that the longest classroom block faces the road where it can be seen by all who pass.  The two other blocks are set behind this block and, together, they form three sides of a square.

John said the community, led by the archdeacon and the vicar of Mongo, worked hard and was able to provide all the local materials that were required, as well as hospitality and accommodation to the team of builders.

The site was set out on March 5 and the walls had reached ring beam level by the end of April, with the first block completed by the end of June.

It is the largest of the three buildings that will be built at Mongo, and comprises two classrooms; a large staff room; two offices and a store.

John states: “Block 1 is now in use.  Desks were needed and so 45 three person mahogany desk were manufactured by the Yei Vocational Training College and were delivered to the school in early July.  The cost of block 1 was approximately $80,000.”

The foundations of block 2 were started before the completion of block 1. The walls and roof have been completed and the plastering has started.

John said that as the rains have now started in earnest and August saw much heavier rain than usual, block 3 will probably start at the end of October.

John Spens' full report can be read in the mission section of this website.