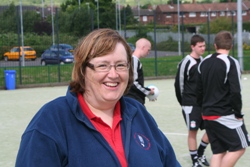 A new website launched by the Church Army showcases the brilliant work Sister Valerie Thom is doing in north and west Belfast.

Valerie, who works for both Church Army and Connor Diocese, is famous locally for bringing Liverpool FC’s community coaches to the Shankill every year, but a film on this new high-tech website gives a greater insight into the work she does on a daily basis.

Valerie speaks of the highs of her job, which are many despite working in one of the most deprived areas of Northern Ireland. She also speaks emotionally of the lows, including a loss that left her questioning her faith.

And some of the people whose lives Valerie is now very much a part of also talk about the difference her help and support has made to them.

The new website Church Army ONLINE aims to give visitors a feel for the work Church Army Evangelists are doing across the UK and Ireland to bring the good news of the gospel to those with little or no contact with church. The site focuses on telling stories, like Valerie’s, through film, and these can be downloaded.

Mark Russell, Chief Executive Officer of the Church Army, said: “These films just represent a fraction of the work we are doing: work which our President Archbishop Desmond Tutu describes as vital and impressive.

“Church Army exists to show ordinary men, women and children that, whatever they are feeling, and however desperate their circumstances appear to be, God hasn't given up on them and there is hope. That has been the story of Church Army since 1882, and that is what Church Army ONLINE hopes to reflect.”