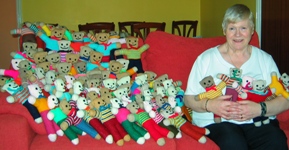 A photograph of a little Zambian girl clutching a doll that was falling apart so touched the heart of Antrim woman Pearl McCormick she began to knit!

The 69-year-old, who knits teddy bears as a hobby, now has 110 teddies in a box ready to be sent out to Kitwe, northern Zambia. And she’s still knitting!

Pearl is one of many parishioners of All Saint’s, Antrim, responding to a plea for donations by the vicar of Antrim, the Ven Dr Stephen McBride, Archdeacon of Connor, who visited Kitwe earlier this year with Antrim curate the Rev David Ferguson.

The parish hopes to send a container load of desks, books, toys, sports equipment and other items out to Zambia in the new year.

Pearl, who has been ill and suffers from memory loss, has knit teddies for a variety of charities over the years. She uses double knitting wool for the teddies which come in three sizes. They all have brightly coloured tops and scarves, and each has a character all of his own.

It is very much a labour of love. Pearl said: “When we were children we had nothing. Any clothes that were too small were cut up and made into quilts. Nothing was ever thrown out.

“I am going to keep knitting teddies until the container is ready to leave. I do not like to think there are little children out there who have nothing, the same way I had nothing when I was a child.”

She added: “I try to make a wee happy face on each teddy. I hope the children like that.”

Pearl, who used to do a lot of sewing, has also donated her large collection of spools, threads, bobbins, brocade, elastic, needles and other items which Archdeacon McBride said will be of great benefit to the women’s sewing programme which is underway in Kitwe. “The programme is all about giving people self- sufficiency,” he said.

Archdeacon McBride said the teddies would give a huge amount of pleasure of schoolchildren in Kitwe. “The school we are trying to support has virtually nothing, so we are collecting everything from pencils to desks for them. The teddies Pearl has knit will bring great joy to many, many children who have never had a toy of their own.”