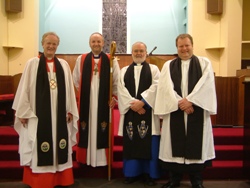 The Church of Ireland Men’s Society Annual held its annual service held in the Church of the Ascension, Cloughfern on Sunday November 23.

In his address to members, wives and friends, the Venerable Barry Dodds, Archdeacon of Belfast, talked about the support for those feeling down received through membership of the Society, of the Church of Ireland and the worldwide Church.

St Paul, a Jewish tentmaker by trade, had suffered imprisonment, shipwreck and danger of many sorts. On his journey to Imperial Rome he was met on the way by Christians from Rome – Paul took courage and realised he was not alone.

For members of the Church of Christ there are no boundaries. Wherever we go God goes before us. Christ on earth could only be with His people in one place, Archdeacon Dodds said.  His death and Resurrection means that wherever we are the Spirit can be with us.

A story illustrated how things some people view as good can actually lead to harm, and perceived bad happenings can often be the cause of good. He told of a man entering the Ironman endurance race dragging, carrying and pushing his disabled son. When he completed the course within the time limits, others commented on what he could have achieved alone. He replied that he would have seen no point in doing it alone. Similarly God could do the race alone, but wants to do it with us in it too.

The service was conducted by the rector of Cloughfern, the Rev David Lockhart, assisted by the Bishop of Connor the Rt Rev Alan Abernethy and Dean Patrick Rooke, Dean of Armagh.